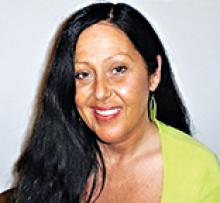 It is with heavy hearts that we announce the sudden passing of Blanche Robinson on Saturday, August 28, 2021, in Cape Breton Island after a brief illness.
Blanche is survived by her daughter Tatiana Robinson (Mike) and grandson Xander; her stepson Glenroy James (Linda) and grandchildren, Dylan, Tylee and Amiya; and her brother Alex Robinson (Natasa).
Blanche was predeceased by her mother Florence and her father Alex "Big Daddy" Robinson.
Blanche grew up in the Fort Garry area of Winnipeg and graduated from Vincent Massey Collegiate. She worked for the Manitoba Telephone System (MTS) for many years and was a union representative. She maintained many longtime friendships, especially with classmates and co-workers. After she retired, she moved to Cape Breton Island where her parents were originally from and where she often spent summer vacations as a child.
There were many layers to Blanche's colourful personality. She was charming, outgoing and fun-loving but also insightful and not afraid to express her opinions. Blanche was fiercely independent and had strength of character, but beneath her strong exterior, was sentimental and compassionate. She was very proud of her children and grandchildren. Blanche was also extremely proud of her Cape Breton heritage and created and a Facebook page that highlighted the beauty, history and culture of Cape Breton Island.
In addition to having a sharp wit and excellent memory, Blanche was very knowledgeable about many subjects. She enjoyed a good debate about current issues as well as reminiscing about the past. She spoke out passionately against racism and was involved in numerous charitable organizations. She loved to travel and immerse herself in various cultures, food and music. Two of her favourite places were Cape Breton and Jamaica. She loved reggae music and was a huge fan of Bob Marley; not just his music, but his message of peace and love.
Blanche overcame many challenges in life. In addition to being a single working mom, she was a compassionate caregiver to others. She looked after her mother when she became ill and helped ensure that Tatiana's paternal grandparents were properly cared for in their declining years. When her beloved "Big Daddy" was in failing health, she moved him to live with her in Cape Breton Island and was his caregiver for many years.
Blanche was living out her dream but tragically, she passed away unexpectedly and far too soon at the age of 61.
Cremation has taken place and a celebration of Blanche's life will take place at a later date.
In lieu of flowers, donations may be made in Blanche's memory to one of her favourite organization the New Victoria Volunteer Fire Department in Cape Breton Island, c/o Chief Blair McIssac, NVVFD, 81 Daley Road, New Victoria, Nova Scotia, B1H 4Z7.

But if you know what life is worth,
You will look for yours on earth,
And now you will see the light,
You stand up for your rights.
- Bob Marley -