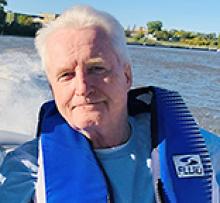 It is with a heavy heart that we announce the passing of our loving husband, son, brother, stepfather and uncle, Mike Thornton, at the young age of 65 in Winnipeg, Manitoba at Holy Family Care Home. He was predeceased by his father Lou and his nephew Michael Jones.
Mike leaves behind his loving wife Rene, mother Pat, sister Anne (Glenn), brothers, Burke and Doug (Anne-Marie); his stepchildren, Matthew (Candice), Leah (Myron) and two grandsons, that were very dear to his heart, Luke and Bo; nieces, Allie, Marika (Chris), nephews, Matthew (CK), Cameron (Maria), Rick, Luke (Tara); great-nieces, Taylor, Carly and great-nephew Jaxson.
Mike was born in Saskatoon and moved to Winnipeg in 1957. His love for sports started at a young age and continued all through his life. He was an avid athlete and sports fan which began when he started going to Bomber games. At the age of 12 he and Mort acquired their first season tickets. Mike's playing career took him from River Heights to the St. Vital Mustangs where he excelled. In 1976 when the Junior Mustangs won the provincial championship, Mike was selected as the Most Valuable Player of the game. Mike then played a few more years with the Senior Mustangs before deciding a change of sport was needed. Spying his brother's goalie equipment in the basement, he decided that was the position and game for him. Being a natural athlete, he taught himself to skate and how to play net. For the next 30 plus years he played alongside his friends on the Bugs and with the Friday noon crew. Mike rarely turned down a game of golf and was always up for a baseball road trip. He saw many stadiums across North America with Tace and any other friends who decided to join in.
Mike had a 25 year career with Ducks Unlimited Canada. He started off his career in Saskatchewan and later moved to Winnipeg and Oak Hammock Marsh where he held the position of National Manager Special Projects. Mike was the brains behind all of the items Ducks Unlimited sold at their events nationally, travelling to shows in the USA and overseas to Asian markets. Many of the suppliers said that Mike was innovative with his thoughts on merchandising. Mike was instrumental in securing historical NHL items for auction including the Original 6 hockey jerseys and a Don Cherry Blazer. He was also the National Manager of the sealed bid auction and grew the easel program to a huge success while managing the offsite print framing. At any one time Mike managed numerous employees across the country. His tenacity, drive and passion for the mission resulted in millions of dollars being raised for wetland conservation across Canada. Mike was a volunteer as well and chaired a local event Boys Night Out which was also a huge success.
Mike died on the very weekend he and Rene had met 26 years ago. She was not only attracted to his looks but his great sense of humour. Due to early onset dementia (CTE) they were never given a chance to enjoy their retirement. His last six months of life were spent at Holy Family Care Home, where he was shown love, compassion and dignity. A special thank you to all the staff at Holy Family for their wonderful care towards Mike. A special thanks goes out to Nurse Halyna who was on top of every need Mike required and made sure he got it. Thanks to all his many friends that helped Rene out over the last 11 years and to those loved ones that went to visit him in the care home. Mike was the bravest man we knew, travelling that 11 year journey with Rene lovingly beside him every step of the way until the end. He was loved so much and will be deeply missed. Rest now Mike - till we meet again, 143.
There will be a service on September 24 but unfortunately due to Covid it will be limited to invitation only. The service will be livestreamed as well.
In honour of Mike and his courage fighting Dementia (CTE) over the last 11 years we ask in lieu of flowers a donation may be made to the Alzheimer Society, 120 Donald Street, Ste. 10, Winnipeg, Manitoba R3C 4G2 or Holy Family Home Inc., 165 Aberdeen Avenue, Winnipeg, Manitoba R2W 1T9.