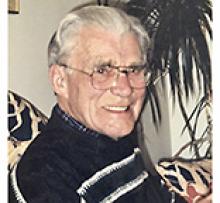 Surrounded by his family's love, our Dad George Peterson passed away peacefully at 100 years of age. Dad resided at Deer Lodge Centre in Winnipeg.
He was predeceased by daughter Nancy (2010), and beloved wife Margaret (2012), twin brother Morris, sister Nancy; and parents, George (Sr.) and Peggy Peterson.
George leaves to mourn his passing, daughters, Pat (Arnold), Alison (Gary); the Alexiuk family (and their children), as well as his many friends.
George grew up in St. Vital and enlisted in the army to fight in the Second World War. After surviving almost four years in a Hong Kong POW camp, George would later be known historically as one of the "Arden Seven". George was the last surviving member of The Winnipeg Grenadiers and was extremely grateful to have been granted 76 extra beautiful years of life in Canada that many of his friends and comrades were not as privileged to enjoy.
George and Margaret were married July 29, 1955, and were blessed with three beautiful daughters, Nancy, Pat, and Alison. They lived a loving and fulfilling life first in Fort Rouge and then in Windsor Park. Dad's other loves included golf, fishing, the NY crossword puzzle, playing cards and spending time at the family cottage at Falcon Lake.
We wish to thank the staff at Deer Lodge Centre, Tower 6 and Tower 5, for the care, respect, and compassion that ALL of you gave to Dad, and ultimately gave to us.
Cremation has taken place. With respect to Covid restrictions, a Public and Military Graveside Service will take place on Friday, September 17, 2021 at Brookside Cemetery, 1:00 p.m. (1300 hours).
Flowers are gratefully declined, however donations in George's Honour may be made to Deer Lodge Centre Foundation, or to The War Amps of Canada.

Rest in Peace Dad as you've been
reunited with Mom and Nancy.
Our Love, Gratitude and Respect
will remain with you always and
we'll miss your wonderful smile.

Many thanks to Eirik Bardal of Neil Bardal Funeral Centre for arrangements.