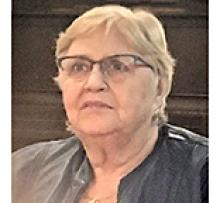 It is with deep sadness that we share that Joan passed away at Riverview Health Centre in the early morning hours of August 27, 2021, at the age of 81 years.
Joan was predeceased by her loving husband William (Bill) Kullman (2006), her mother Ethel (1981), her father Gordon (2004), and her brother Douglas (2020). She is lovingly remembered by her stepson Kevin Kullman (Pamela) and grandchildren, Lukas and Maia; stepdaughter Cathy Chunesingh (Ivan) and grandchildren, Jared and Jasmine; sister Lynne Pinterics (Jean Tinling), children, Miska, Tasha, Heather, Craig and their families; sister-in-law Lynn MacDonell and children, Doug, Jeffery, Jaimie, Gregory, Monique, Matthew, Kristin and their families; sister-in-law Carol Matthews (Tom) and children, Chris and Jon, and their families; as well as many cousins and friends.
Joan was the first-born child of Ethel (Hubble) and Gordon MacDonell (1939), and they lived for the first years of her life on Lansdowne Avenue, Winnipeg, Manitoba. While Joan experienced her father being away during the last three years of the Second World War, she was nurtured by her mother, her Aunt Rene, and her mother's mother (Nannie), who lived with them, and who continued to live with them in their next house on McMillan, where siblings Doug and Lynne joined them (1943/1947). Joan attended Grosvenor, River Heights, and Kelvin Schools. Joan's childhood was enriched by connection with her maternal Hubble clan, where there was always music and singing around the piano in four-part harmony, as well as singing in church choirs; music was a joy she continued to share with both of her siblings throughout her life. With her paternal extended family, there were many holiday gatherings and summers at cabins at Caddy Lake, Matlock and Lake of the Woods, times filled with berry picking, swimming, canoeing, and cousin comradery.
After high school, Joan worked in the office of physicians at the Winnipeg Clinic, which inspired her to become a Licensed Practical Nurse. She subsequently worked in hospitals in Winnipeg, Carman, Thompson, Toronto, and Red Deer, before returning to office work at the City of Winnipeg. There, she was introduced by her friend Rose, to Bill Kullman at his request, and thus a wonderful new chapter of her life began. They were married January 4, 1975, and she was delighted to become stepmother to Bill's children, Kevin (12) and Cathy (nine). She welcomed them into her home with Bill, and they spent many treasured times, as well as in their trailer at favourite camping spots in Bird's Hill, Big Whiteshell, Rushing River, and Lee River, to name a few. She and Bill also managed to spend part of each winter in Riverwoods Plantation in Estero, Florida, despite Bill suffering a stroke after his retirement at age 53. Although he eventually became confined to a wheelchair, they continued to enjoy life together. For the last years of his life, Bill resided in Riverview Health Centre before passing away on February 27, 2006; a devastating loss for Joan.
Joan loved people, and one of her strengths was making lifelong friends, including some that continued from childhood (Luain and Maris), as well as from her places of work, and through her involvement with the Stroke Association. She continued to travel with friends (Myrna, Jean, and Ellen) on cruises, to Mexico, and/or seniors' events in Winnipeg and the Interlake, and she loved to share stories of her travels. She was always interested in the lives of family and loved ones, including her cherished friends and their children. She never failed to remember birthdays and anniversaries, celebrated their special events, and felt deeply when any of them struggled.
After her diagnosis of Pulmonary Fibrosis, and her subsequent isolation as her health declined, Joan was no longer able to attend family occasions, particularly throughout the pandemic. Joan was also deeply affected by the death of her brother Doug in November 2020 and missed her daily phone call to him to share their days. Even through this difficult time, Joan kept up with friends and relatives by phone, always enquiring about their lives. She also liked to watch sports, especially curling, and do word searches to pass the time.
Joan was admitted to Seven Oaks Hospital in March 2021, and then was moved to Riverview Health Centre Acute Pulmonary Ward in May 2021. She was sad about not returning to her home on Alpine Avenue, however, she felt like she was returning to a familiar place at Riverview as she had lived in residence there while working at the Princess Elizabeth Hospital many years prior. Her husband Bill had lived in Riverview at one time as well. Joan felt comfortable and cared for during her last few months, even as her breathing capacity deteriorated. She would smile at all staff as they attended her, and would always thank them, consistently true to her gracious and kind manner.
Lynne, Kevin, and Cathy were with her continuously in her final days and are deeply thankful to Charge Nurse Connie, and all the staff of 2 West for their compassionate care of Joan throughout her time at Riverview.
Cremation has taken place.
In keeping with the current public health measures, a memorial service will be held Saturday, September 25, 2021 at Glen Lawn Funeral Home & Cemetery for close family and friends.
In lieu of flowers, donations may be made to the Stroke Recovery Association of Manitoba, the Manitoba Lung Association, or the Riverview Health Centre Foundation.