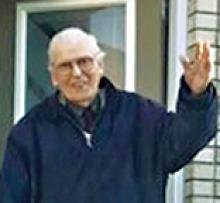 On Sunday, September 5, 2021, at the age of 101, our Dad's big and tender heart stopped beating.
He was predeceased by many of his family and friends - including Elsie, his wife of 44 years; and his brothers and sisters, Steve (Minn), Olive (Andy), Merrie (Vern) and Ted. He is survived by people who cherished him deeply; his daughters, Kim and Kara (Jeff); his grandsons, Billy (Amanda), Bret (Kristy), Ryan and Devin; and his great-grandson Otis; brother-in-law Johnny (Annie) and sister-in-law Betty (Fredrick); nieces and nephews, Patricia (Bobby), Nancy (Dave), Duane (Barb), Edwin (Loyda), Tracey (Lawrence), Bruce (Sharon) and Fred; and a handful of dear friends, Al and Jason, Gail and Les, and neighbour Gabrielle.
Born on Manitoba Avenue in Winnipeg's north end on April 25, 1920, Dad was proud of his Ukrainian heritage and was greatly influenced by events of the times, including the Winnipeg General Strike, the Second World War, the Great Depression, and his work with Winnipeg Transit. A hobby historian who could recall precise and vivid details of a lifetime spent in Winnipeg, his stories could enlighten and entertain for hours. As a youngster, he would walk or run for miles on the weekends. On summer holidays he loved to swim in local swimming holes; follow the exotic circus animals when they arrived by rail, and haul water for the elephants in hopes of getting a free entrance ticket; watch the propeller airplanes take off from the airfield (also in hopes of having a pilot invite him along for a ride); follow the coal carts to pick up scraps that fell off the back; work at his family's mink ranch or visit his grandmother's homestead near Stead; sell newspapers in order to pay for tickets to the cinema; and wander through the woods picking mushrooms with his good friend Al. We believe that his love of walking kept him fit and contributed to his longevity: he reluctantly started using a cane in his 99th year.
Although we are deeply feeling his loss, we hold dear the memories of him as an honest, hard-working, loyal, thrifty, conscientious and fair-minded family man.
At Dad's request, we will hold a private family interment at Chapel Lawn Funeral Home.
No flowers please. If you feel moved to do something in his honour, think of a child, elder, neighbour or family member who could use some companionship and give them the gift of time.