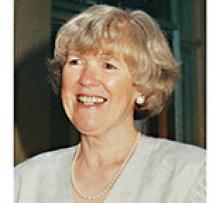 The family of Beverley Bennett are saddened to announce that after suffering a stroke, she passed peacefully on August 28, 2021 at Foothills Hospital in Calgary, Alberta.
Beverley was born on November 1, 1932 in Winnipeg, Manitoba. She was predeceased by her parents, Donald and Maria McKerchar, and was sister of Brian McKerchar of Markham, Ontario. She was a dedicated wife to her high school sweetheart, Brian Bennett (also of Winnipeg) who passed on January 7, 2012.
She is survived by two sons, Richard (Sandra) of Vancouver, Gordon (Cathy) of Victoria; two daughters, Jill in Calgary, Lynne (David) of Mississauga; and one grandchild Melissa of Calgary.
She lived through interesting times, as a child during the Second World War and also as a survivor of the polio breakout in Winnipeg. She graduated from Kelvin High School in Winnipeg and then became a member of the International Honorary Business Sorority (Chi Alpha Chapter, Alpha Iota) in 1951.
As a young wife and mother, she organized many family moves across the country and once settled in, became actively involved with the Newcomers Clubs in each city, sometimes being on the Executive and always establishing Bridge Clubs along the way. She enjoyed working at the Mississauga General Hospital and the Royal Bank in general administration roles in the 1970s.
An active lady, she enjoyed cross country skiing, playing tennis, and walking her beloved dog "Monty" down in Fish Creek Park. In her later years she enjoyed reading a good book, chatting on the phone and watching a great tennis match.
She will be greatly missed. A private Graveside Service will be held for the family at Mountain View Memorial Gardens in Calgary on Friday, October 8.