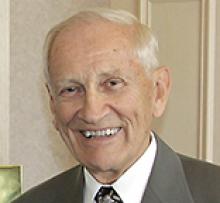 John Derksen was born in Einlage, Ukraine on May 2, 1935 and passed away peacefully on September 15, 2021, at his home in Winnipeg.
John was the eldest child of Dietrich and Tina Derksen. He spent his childhood in Einlage until his family was able to escape to Munich, Germany in 1943 during the Second World War. At the end of the war, John, along with his parents, immigrated to Canada, first settling in Morris, MB and eventually moving to Winnipeg.
John became a Christian and was baptized at First Mennonite Church. He completed his post-secondary education at Red River College which eventually led to a career with Manitoba Hydro that spanned 37 years.
In 1963, John married Hedie Wall. They had two sons, David born in 1967 and Gary born in 1970. In 1973 John purchased a hobby farm near Poplar Point to fulfill his wife's desire to have a country life. John retired from Manitoba Hydro in 1993. John enjoyed farming, travelling, golfing and spending time with his family.
John had many diverse interests and was artistically, musically and athletically gifted. He was a loyal, devoted husband and father, modelling his steadfast faith in Christ.
John will be sadly missed by his wife Hedie (nee Wall), his sons, David (Dianne) and Gary (Irene), grandchildren, Danton, Conner, Kieran, Everett, Talia, Helene, and sister-in-law Marianne Wall and her family.
We would like to thank the Palliative Care Team from CancerCare Manitoba for the excellent and compassionate medical care John received.
Viewing will take place at Friends Funeral Home in Winnipeg at 6:30 p.m., Friday, September 17, 2021. Celebration of Life service will be held on Saturday, September 18, 2021 at the Community Fellowship Church in Newton, MB, at 2:00 p.m.
Donations in memory of John can be made to Union Gospel Mission or Mennonite Benevolent Society.