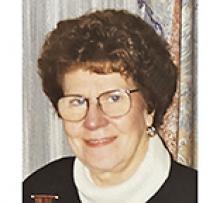 Elsie Rempel was born in southern Manitoba to Jacob and Sara Wiebe on August 29, 1932. She lived many of her early years in Steinbach and had three elder siblings, Lydia, Agnes and Jake (Norma) who predeceased her. She is survived by her nephews, the sons of her brother Jake, Tim and Rob.
Elsie married Tony Rempel in June 1957 and they were married for 64 years. She is survived by her husband Tony Rempel; her sons, Roy (Michelle) and Murray (Shannon); her grandson Derek, her granddaughter Daria, and their mother Shelley. She is also survived by her sister-in-law Martha Rempel, her brother-in-law Werner Rempel (Elda), her brother-in-law John Rempel (Esther); as well as by six of her nieces and nephews, Arthur, Harold, Karl, Colin, Vanessa and Beverly. Two of her nieces, Elaine and Johanna, very sadly predeceased her.
Elsie excelled in music throughout her life, becoming a fully qualified musician. She taught piano and organ throughout her life, both at home and at Providence College. She served as the organist for the CBC Hymn Sing Chorus, and also as organist and choir director for a number of Winnipeg churches over a 20 year period. Classical music was her lifelong passion and she waited with great anticipation for new concerts by the Winnipeg Symphony every year.
Elsie also loved golf and travel. She and Tony went to Europe a number of times and they spent considerable time in the southern U.S., especially in Florida.
Elsie's final years were difficult and she benefitted from the very kind support provided to her by Dr. Chantal Frechette. We are relieved that after a prolonged illness, she is now at rest and free from pain.
She passed away on Wednesday, September 8, 2021, at the age of 89 years.