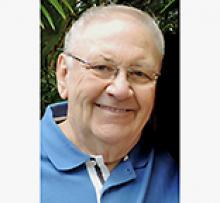 It is with great sadness that we announce the passing of Albert Edward (Ted) Chambers on September 12, 2021. Born in Winnipeg to Queenie and Albert, Ted was a true north end boy. He met his beloved wife Alace in high school and the two became the best of friends long before they fell in love. Ted and Alace built their lives together as true partners as they raised their family and went on many globe-trotting adventures over the years. In his younger years, Ted was an avid glider and loved to fly.
Ted was a devoted employee of MTS for 35 years, starting out as a technician in the shop, then the central office and up through the ranks to sales where he eventually used his knowledge and talents in the training division. Ted met so many of his lifelong friends at MTS. Ted volunteered his time as a Shriner, and took great pride in spreading joy to others as "Tired Teddy" the clown. His family and friends marveled at Ted's artistry, whether it was his fantastic paintings, intricate model ships, stained glass artwork or other crazy and creative projects. When he retired from MTS, Ted put his creativity to work as he and Alace invested in their new adventure, the Woodlands Gallery. Together, they built their business into one of uncompromising quality, with Alace at the helm and Ted working tirelessly behind the scenes as framer and artistic director. Their dedication and hard work allowed them to retire at the lake and have many years of fun in the Arizona sun during winters. The two cherished their time together long into their retirement, recently celebrating their 57th wedding anniversary.
Ted is survived by his wife and love of his life Alace, their two daughters, Kathleen (Darren) and Chandra, and their beloved grandson Michael. Ted cherished every minute he could get with his family and was incredibly proud of them all.
Ted fought his illness with everything he had, right to the end. The family wishes to thank all of Ted's "Angels" at CancerCare Manitoba (Victoria) who supported him and Alace through years of treatments, Ted was so grateful for your loving care. Special thanks to Claudette. Thanks also to the incredible friends and family who made Ted's last years so very memorable.
As per Ted's wishes, there will be no service. Instead, we invite everyone to raise a glass together and have a toast.
In lieu of flowers, donations can be made to CancerCare Manitoba or the charity of your choice.