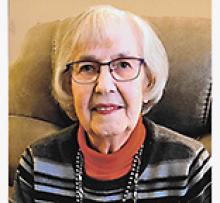 It is with great sadness that we announce the death of Cécile Rémillard Beaudry on September 4, 2021, in Winnipeg, Manitoba at the age of 95 after a long illness.
She was predeceased by her husband Georges Beaudry; her parents, Zéphir and Marie-Anne Rémillard; brothers and sisters, Marguerite, Hercule, Léo, Gérard, Thérèse, Paul, Bernadette, Joseph, Marcel, and Robert. She is survived by her brothers-in-law and sisters-in-law, Mariette (Ernest Gervais), Jules, Lorette (Gilles Ferland), Charles (Carole St. Jean), Jean (Denise Perrin), Pierre (deceased) (Louise Savoie), Lynda (Hubert Fournier), along with numerous nieces and nephews.
Cécile had a happy and adventurous life at the age of 18, where she attended the Congregation of the Sisters of the Holy Names of Jesus and Mary. She taught 22 years in Manitoba under the name of Sister Anne-Marie. She was the last Principal at St. Joseph's Academy in St. Boniface and the first Principal of Louis Riel Collegiate.
In 1969, she resigned as Principal to become a missionary in Brazil. Eventually, she left the sisterhood and married Georges Beaudry. She taught a few years in Quebec, then with her husband, went to Algeria, Africa to operate a school for the children of the engineers who were working for SNC-Lavallin in Oran, Algeria. When their contract ended, they went back to Brazil as lay missionaries. The Cardinal of Sao Paulo offered them an abandoned parish. In a short time, Paroquia do Cristo Ressissitado became a vibrant Christian community. At the same time, they were being watched by a fanatic faction of the army, the Conquistadores da Morte who were known to assassinate missionaries and lay people whom they suspected of inciting people to rebel against the military rule in power in Brazil.
Luckily, a General of the Army came to notify them that their lives were in danger and that they should leave Brazil in a week at the latest and in a quiet and quassi-secret way. This ended their beautiful missionary dream.
Back to Canada, back to teaching, this time in Northern Quebec, Chibougamau. A year and a half later, another tragedy struck. The beloved husband of Cécile died of a virulent form of cancer. With courage Cécile pursued her life alone but strong with the great love she had received from her husband Georges.
She moved back to Manitoba to be with her family. There she taught part-time, was agent of Human Resources at the Manitoba Francophone Federation and President (per interim), was President of Réseau, was a member of the Council for the Status of Women in Ottawa, was director of the Federation of the Francophone Seniors. There she founded Le Théatre des Ainés.
Cécile retired in 1991. As usual, she did it her way. She registered at the McGill University in Montreal to pursue her studies in Religious Studies at the Master and Doctorate levels. After completing the compulsory program of a year of studies, she began her thesis but for health reasons, she had to drop her project. From then on, she found other ways to help others. It happened that a little grandnephew needed that help. Everyone in the family know about the love story that developed between Michel and Cécile.
With time, however, Cécile realized that although she had travelled all over the world, she lacked her roots. It is then that, at the age of 89 years old, she moved back to her native Manitoba. Is it there that she found her roots. This was proven in 2016 when her nieces and nephews celebrated her 90th birthday. Some 70 of them showed up to show her their love and attachment.
Numerous are those who were touched one way or another by Cécile.
As a religious, she was a faithful member of the Holy Names. As a teacher, she was competent and respected.
She was a good listener and many confided in her. As a woman and wife, she beamed with happiness and love. As a widow, she was brave and strong. As an elderly woman, she was gracious and loving. She was a great advocate of Love, Love, Love. She was a woman of great faith but not the preaching type.
She will be missed la belle Matante Cécile.
Funeral services will take place on Saturday, October 23, 2021 at 11:00 a.m. in the Parish of St. Joseph, MB. Those wishing to attend are welcome and must provide proof of their immunization card upon presentation at the church. Masks will be required as Covid restrictions. Interment will take place at another date and time.
The family wishes to extend their gratitude for the excellent care she received at Park Manor Residence.