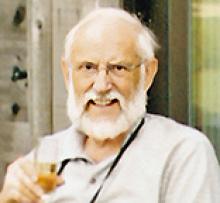 It is with sadness that we announce the passing of Doug Flint, aged 88 years, on September 14, 2021, at the Grace General Hospital, following a brief illness.
Doug will be lovingly remembered by his son Gordon (Lynda); stepdaughters, Robin (David) and Bonnie; grandchildren, Trevor, Michelle (Geoff), Christopher (Delaney), Cameron, Andrew, and Naomi; great-grandchildren, Roman, Jaxson, Thomas, Addilyn, and Jude; and by his brother George and his wife Beverly. Doug was predeceased by his wife Phyllis; his parents; his son Ken; his brother John; sisters-in-law, Margaret and Shirley; brother-in-law David and his wife Coralie. Doug will also be missed by many nieces and nephews and their families.
Doug was the youngest of three sons born to Ross and Charlotte (Grant) Flint. Doug grew up in Toronto attending high school at Lawrence Park Collegiate and graduating from Civil Engineering at University of Toronto (U of T) in the mid-1950s. Doug worked on the original highway 400/401 interchange and although he found his work interesting, he felt a strong calling to ministry. Doug changed course, returned to the U of T at Emmanuel College, and completed his Masters of Divinity in 1960. After marrying Enid Bowyer, they moved to Kelvington, Saskatchewan to begin Doug's career as an Ordained Clergy with the United Church of Canada. With dedication and care Doug would serve the communities of Kelvington; Markdale and Norwich, Ontario; Winnipeg, Manitoba; and retire from Steinbach, Manitoba in 1997.
During the early years of Doug's calling, the family would grow with the birth of Gordon (1963) and Kenneth (1965). While living in Winnipeg, Doug met Phyllis McKenzie (Serle) and they married in 1980. Doug and Phyllis loved and accepted each other's children as their own. As the family grew, each new member was warmly welcomed with open arms and unlimited love.
Doug was keenly interested in "everything"! He was a deep thinker, concerned citizen, and engaged member of his communities, as wide as he perceived that community to be. After official retirement, Doug was a dedicated volunteer with West Broadway Community Ministry. He also took Sunday services for many churches in Winnipeg, and surrounding communities, as well as performing weddings and funerals for past-parishioners.
Doug grew up as a loyal fan of all sport teams Toronto. That love of sports would expand over time to being a fan of both the Winnipeg Jets and the Blue Bombers. He also enjoyed both golf and curling and curled with the Chaplains Curling League for a number of years. He also loved to paint and he created many beautiful gifts and pieces of art from the landscape photos he shot on his travels.
Doug loved travelling and he was an avid enthusiast of all things train/railway related. When he could combine both of these interests, he was in his glory. He and Phyllis enjoyed exploring the east coast of Canada with his sons, and later were able to travel by train across Canada and the US Midwest and east coast, by ship down the St. Lawrence, cruise through the Panama Canal, to Alaska, and up the east coast to see fall colours. He was also a voracious reader, enjoying the newspaper from cover to cover every day, and waiting for his favourite mystery writers - Ian Rankin and Louise Penny – to publish a new book.
Above all, after retirement, the little cottage at Dunnottar was a haven and retreat and many friends and family enjoyed a summer afternoon there, chatting, playing Rummoli or Canasta, enjoying a cool beverage and sharing in a barbecued dinner or ribs at the Emporium. A hot summer afternoon could be spent in the gazebo where a cool breeze blew off the water and where a good book waited to be read while Charlie the Cat purred beside him. Doug enjoyed the cottage to the end.
A private memorial service was held at Young United Church and interment will follow at a later date in Neepawa. Doug's family kindly requests that his friends and relatives take a few minutes to honour his memory by visiting his tribute page at EthicalDeathCare.com. A photo-biography, as well as memories and stories published by those who knew him, are available there.
In lieu of flowers, donations may be made to West Broadway Community Ministry, 102-222 Furby Street, Winnipeg, MB R3C 2A7 or a charity of one's choice.


With heavy hearts, we announce the passing of Doug Flint, aged 88 years, on September 14, 2021, at the Grace General Hospital following a brief illness.
Doug's family kindly requests that his friends and relatives take a few minutes to honour his memory by visiting his tribute page at EthicalDeathCare.com. A photo-biography, as well as memories and stories published by those who knew him, are available there.
Due to Covid restrictions, a private celebration of Doug's life will be held at Young United Church.
A longer obituary to follow.