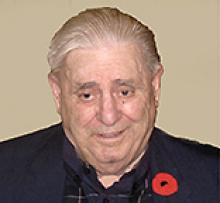 After a long illness, Ed Nikkel passed away at Golden Links Lodge on September 13, 2021.
Ed was a proud Second World War Veteran who lived much of his working life in military service with postings in Europe and across Canada. He was a great hockey player and coach and in his senior years developed a passion for stamp collecting and corresponding with traders worldwide.
He is survived by his children and their spouses, Gaylene (Nick), Debbie (Curtis), Tammy (Robert), Edward, Corey (Linda); his stepchildren, Grant (Barbara), Bill (Charlene) and Linda; as well as 15 grandchildren and four great-grandchildren. He was predeceased by his first wife, Jean Catherine Nikkel; his second wife, Lois Nikkel (Nicolson), and by two sons, Keven and Glen Nikkel.
We would like to extend our appreciation for the care and support that staff at Golden Links provided to Ed throughout his stay at their residence.
A memorial will take place at a later date.