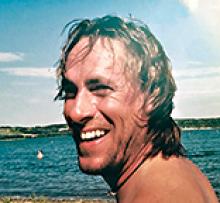 It is with shattered hearts, that we announce the sudden and unexpected death of James Scott Marks, 56. Scott passed away peacefully in his sleep on Sunday, September 12, 2021.
He leaves behind his one true love of 25 years, Catherine Newcombe, stepson Toby Bartlett, brother Dave, nephew Andrew (Jenny), great-niece Allison, niece Christine (Mike), sister-in-law Toni, as well as many cousins. Scott was very close to and protective of his brother Dave, always visiting him with treats, books and movies. He loved Dave and looked out for his best interests vehemently. Scott was predeceased by his mom and dad, Kay and Bob, and his brother Doug. Scott leaves behind Catherine's family as well, who all loved him and agreed he was the best person to ever come into Catherine's life. Scott and Catherine had loads of fun at her brother Charles and his wife Kathy's cottage. He will also be missed by Catherine's nieces and husbands, Leah and Jay, Christie and Johnny, Kelly and Orr and all their seven children.
Scott also leaves behind many many lifelong friends, who he considered as close as family, and who love him very much. All his friends knew Scott by his nickname "SM" (short for Scott Marks), and they knew his gentle spirit, contagious laugh and immense kindness. He was the sunshine in the room. Scott is looking down on everyone and wishing everyone eternal happiness. Even though Scott is gone, his spirit will continue on in the hearts of everyone who knew him.
Scott worked for the last 35 years as a commercial gas-fitter and was passionate about his job. A lot of his customers were in small towns throughout the province but Scott found driving and working in rural Manitoba very peaceful and a fortunate aspect of his career. He loved his job and his dedication to his work was evident in so many ways. He once spent two days in a greenhouse, helping the owner keep the heat going during a winter storm to save all of their plants from freezing. No matter the weather, the time of day (or the night), Scott was there to save the day and make sure everyone had heat. He did this with a smile on his face and kindness in his heart.
Scott loved his family and friends and he made everyone laugh. He was the kindest and most generous person you ever met, but also very humble. He just wanted to make things better for those around him, in any way that he could. We really believe that Scott was an Earth Angel. He would help a total stranger in a heartbeat, push someone out of a snowdrift or stuck in a muddy ditch. The stories about him helping people are too numerous to mention, but if you had the pleasure of knowing him, chances are he offered to help you in some way. Scott and his friend Pete were given heroes awards for fearlessly going into a burning car engulfed in flames and pulling the driver out. He was our real life super hero for sure. Scott was one of those people that anyone who met him never had a bad word to say about him.
Travelling with Scott was a wonderful happy adventure. Catherine and Scott took some fabulous winter trips, their favourites being the three times they went to the jungle outside Puerto Plata to stay with their friends in their jungle estate. They were toured around by their pals, all over the north and east coasts of the Dominican Republic, which was an amazing time. Many people will remember some crazy-fun weekends at Scott's cottage, where they tubed, knee boarded, played croquet and had giant bonfires.
Scott's passing is truly a loss for those that loved him, knew him and worked with him. Our loss of him will be felt deeply and forever. His close friends Johnny Hall, Pete Guttormsson and Morgan Mackenzie are all heartbroken, as is Russ Douglas, who was Scott's closest work friend during his whole career.
A celebration of Scott's life will be held when the world has returned to normal for travel and group gatherings.
In lieu of flowers, the family asks that a donation be made to Scott's favourite charity: The World Wildlife Foundation.