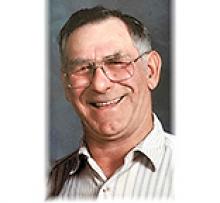 On September 10, 2021, Joseph Bugera peacefully passed away at Bethesda Health Centre in Steinbach at the age of 83.
He was predeceased by his wife Lillian; stepson Gordon; his parents, Michael and Maria; brothers, Peter, Nick, Mike, William and sisters, Ann, Francis and Helen.
He is survived by his brother Steve (Mae) and his sister Marilyn (Paul). He will be remembered by his step-children, Michael (Melodie), Robert (Carol), Gerald (Debbie), Marlene (Paul) and Christina (Kerry) and many grandchildren and great-grandchildren who referred to him as Gido.
Joe was born and raised on a farm in Arbakka, Manitoba. His favourite past times included hunting, gardening, walking in the bush, picking mushrooms and searching for antlers. He enjoyed bee-keeping, wood-working and had a gift for mechanical repairs around the house and yard.
Joe spent many years working in different trades, before moving into construction where he worked as a grader operator, in which he took great pride until his retirement. During his travels with work he would bring home many treasures he found on the side of the road. Gido loved to share his stories with his family, friends, and anyone who came to visit.
The family would like to extend their thanks to the Vita Personal Care Home. A private family graveside service will be held at a later date.