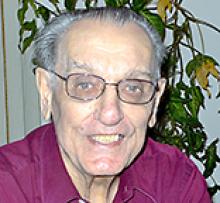 It is with great sadness that we announce the death of Henry Joseph Jurkowski on Sunday, September 12, 2021 at Grace Hospital at the age of 94 years.
Since July of 2016 he had been a resident at Holy Family Home in Winnipeg.
Henry was born on January 9, 1927 and was raised in the North End of Winnipeg. On July 12, 1952 he married the love of his life, Rose, and they started a family, raising four children on Old Kildonan. Henry worked for MTS and retired in 1987 with 35 years of service. Since 1960, the Jurkowski family were long time parishioners of St. Anthony of Padua Church in West Kildonan. Henry was also a lifetime member of the Polish Fraternal Aid Society of St. John Cantius. For many years he was the Monday night bingo caller at the hall on Mountain and Arlington. Then he served on the Executive for two terms as President. Henry was also active with the Society's Seniors Club and was the Treasurer for many years. Henry loved bowling, curling and was an Ace horseshoes competitor. One of Henry and Rose's favourite pastimes was playing cards with his siblings and their spouses. More recently word search puzzles kept his mind sharp and helped to fill in the hours.
Henry is survived by his sons, Anthony in California, Arthur and Vincent in Winnipeg; daughter Terry Davies (Vince) in Red Deer; granddaughter Stephanie and grandson Justin, both in New York. Henry is also survived by his brothers, Karl (Wendy), Joe (Ruby) in PEI; sister Pat Reimer (Jim); sister-in-law Jeanette; as well as many nieces, nephews, and friends.
Henry was predeceased by his dear wife Rose; parents, John and Mary; sister Michaelene Wasney, and brother-in-law Frank Wasney; brother Edward and sister-in-law Mary Ann; brother Ted; infant brother Walter, and his daughter-in-law Natalie in California.
Mass of Christian Burial will be celebrated on Wednesday, September 22, 2021 at 10:00 a.m. with visitation at 9:30 a.m. at St. Anthony of Padua Parish, 250 Burrin Avenue, West Kildonan, with Rev. Dominic Yuen officiating. Interment will follow at Assumption Cemetery. The Knights of Columbus will graciously be providing Pallbearers.
The family thanks the staff and health care workers on 5A St. Micheal's at Holy Family Home for the outstanding care that Henry received for the last five years.
In lieu of flowers, donations may be made in Henry's memory to CancerCare Manitoba.
Make a donation to