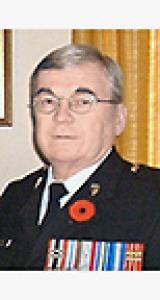 It is with great sadness that we announce the passing of Fred Tuttle on August 30, 2021, following a brief illness, with his children by his side.
He is survived by his children, Carrie Ann Tuttle (Rob) and Mark Frederick Tuttle (Patty), and grandchildren, Morgan and Hayden Lynn. He also leaves his sister Cheryl Ramsay (Ernie); sister-in-law Jackie Tuttle (Ken) and brother-in-law Lang Allison (Sue Ellen), as well as many other members of the Tuttle family, and friends. He was predeceased by his parents, Elmer John and Mavis Beulah Tuttle, sister Sue Ellen Allison and brother Ken Tuttle.
Fred was born in Manitoba on May 18, 1946 and graduated from the University of Manitoba at Brandon College in 1967 through the Canadian military ROTP program. A retired Major, his postings in Canada took him to Kingston, Edmonton, Alert, Valcartier, Chilliwack, Ottawa, and Toronto. His final posting was Winnipeg. His postings abroad took him to Syria, Croatia with the UN and to NATO headquarters in Brussels. His children visited him many times during his postings abroad and thus began their love of travel. Trips to Israel, Syria and Egypt involved car rides with the three of them listening to Paul Simon and Art Garfunkel... and lost luggage. They also enjoyed many tours of Europe together.
His grandchildren will greatly miss their Grandpa "Freddie", and among the many fond memories of their times together will be the early morning walks to Tim Hortons for hot chocolate when they were very young.
During his retirement Fred was a dedicated volunteer for the Winnipeg Meals on Wheels organization as both a dispatcher and delivery person.
Dad, you will be greatly missed and lovingly remembered.
As per Fred's wishes, cremation has taken place. A private family memorial will be held in Ontario.
Please consider a donation to a charity of your choice in his memory.