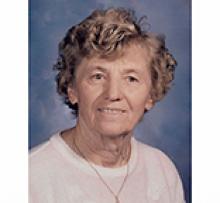 Helen Kornelsen, aged 92 years, passed away peacefully on Wednesday, September 15, 2021, at Bethesda Place, Steinbach, MB.
Helen was born in McTavish in 1929, to George and Annie Kornelsen. Her family lived in McTavish, then Kleefeld, finally moving to Ridgewood when Helen was six years old. After seven years of elementary school, Helen stayed home to help her mother with household duties and to assist in raising her younger siblings. She soon took over the family cooking, baking, canning and sewing. She also occasionally did some day work for neighbours, as well as holding some local jobs. Later, Helen decided to upgrade her education, graduating from Bible College and receiving an education degree. Following this, she taught in various elementary schools and later in high school.
Helen's faith was always very important to her. She was baptized at age 16 in Blumenort Church, and she taught Sunday School and DVBS in Ridgewood Church. In 1965, she felt God calling her to foreign missions, which led her to teaching at King's College in Belize for 19 years. When she came home to retire, Helen felt restless, so she headed off to Paraguay to teach missionary children for three years.
Helen retired in Ridgewood and then in Steinbach. She continued to be involved in various voluntary services in her church and in the community. She worked for ACL (now enVision), she assisted in EAL classes, and volunteered at the Steinbach Mennonite Museum as well as the MCC Thrift Store.
Helen has been a strong role model and an inspiration to many, with her generous spirit of service, her gratitude and contentment and her positive approach to life. Her last years were not easy or comfortable, but you would never hear her complain.
Helen is survived by three sisters, three sisters-in-law, three brothers-in-law, and numerous nieces and nephews.
She was predeceased by her parents, six brothers, one sister, one brother-in-law and four sisters-in-law.
The funeral service was held on Tuesday, September 21, 2021, at 2:00 p.m. at Birchwood Funeral Chapel, Steinbach, MB., with viewing prior to the service.
Interment followed at Ridgewood EMC Cemetery, Ridgewood, MB.