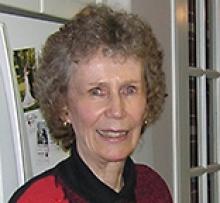 With her children at her side, Sheila passed away peacefully on September 21, at the age of 89. Sheila was born on June 14, 1932 at her parent's home in Crandall, Manitoba.
She was predeceased by her parents, Helen and Claude Dickey and her sister, Claudia Kerwin (2018). Her death is mourned by her brother, John Dickey; daughter, Teri Gartner (Mike) and grandson, Joel (Stephanie); son, Dean Keating (Debbie) and grandsons, Chad (Stacey), and Drew (Zita); three great-grandchildren, Eddie, Tia and Ivy; cousins, Lois Daly, Mary Helen, Neil and Brian Johnston; sisters-in-law, Marion McNabb and Patt Keating; and many nieces and nephews.
Sheila enjoyed a happy childhood, growing up on a farm in the small community of Crandall, MB. At 17 she moved to Winnipeg to live in residence at the University of Manitoba, enrolled in the Faculty of Home Economics where she made many lifelong friends. Upon graduating in 1953 she married Jack Keating. They had two children and in 1958 moved to Windsor Park where they raised their family and made another set of great friends. Sheila was a stay-at-home mom. She was a particularly good seamstress and enjoyed sewing stylish clothes for herself and her daughter, possibly the best-dressed girl in school. Sheila also enjoyed playing bridge, singing in the United Church choir, and later, curling and bowling. She was especially fond of spending time with friends and family. Sheila and Jack separated in 1981.
In her later life Sheila volunteered at Age and Opportunity. More recently she resided at Lions Place where she valued the friendships she made there. She was a staunch Blue Bomber and Winnipeg Jets fan, and as her vision failed, listening to their games on the radio gave her many hours of enjoyment.
Many thanks to the staff at Beacon Hill Lodge Long Term Care Home, where Sheila spent the last year of her life under difficult Covid restrictions. Their care and support made her life as comfortable as possible.
A private family celebration of Sheila's life will be held. Interment of her ashes will be at Crandall, Manitoba cemetery at a later date.
In lieu of flowers, donations in Sheila's memory may be made to CNIB Foundation, 1080 Portage Ave., Winnipeg, MB R3G 3M3.