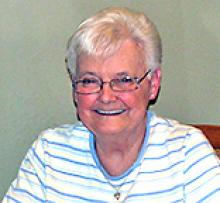 Peacefully with family by her side, Barbara passed away on September 22, 2021 in Winnipeg, at the age of 81 years.
Barbara was predeceased by her parents, Ann (Talocka) and Nick Dilay; her in-laws, Anne (Boyko) and Paul Padoba
Barbara will be sadly missed and lovingly remembered by her husband Clifford Padoba; children, Lori (Steve) Dyck, Brad Padoba and Wes (Tammy) Padoba; grandchildren, Tara-Lynn Padoba, Amanda (Char) Hebert, Brayden and Zachary Padoba and great-grandson Maxwell Hebert. Also left to cherish her memory her brother Joel Dilay; friend Jeannie Bazuniuk; sister-in-law Cecile Roy and nephews, Darren and Cameron Dilay.
Barbara graduated from Isaac Newton High School in 1958 and shortly after, began working at Retail Credit of Canada. Later she became employed by Department of Veterans Affair in the purchasing department. On May 13, 1961 she married Clifford and began their 60 years of togetherness. In 1963 they purchased their first and only home in the Kern Park area of Transcona. Here they enjoyed decades of celebrations and good times with children, grandchildren, family and friends. When the time was right, she returned to work being employed at Metro Drugs (Kern Park). Here she enjoyed and developed many lifelong friendships. When Metro Drugs went out of business and she wasn't quite ready to retire, she found employment with Red River Door and later Shirley D's. Here she began doing food demos at Safeway (Kern Park) in the bakery department. This was a job she enjoyed as it gave her the opportunity to meet many of the fine people of Transcona that frequented the store.
Barbara enjoyed gardening, knitting, crafting and spending time with family and friends. A highlight for her this year was being able to meet her great-grandson Maxwell.
The family wishes to thank CancerCare Manitoba, especially Dr. Leylek, nurse Jennifer and Dr. Aoki for all their help and care these past few years. A very special thank you to all the nurses from Palliative Care, especially Richard and Dominique for all your support, care and compassion during this difficult time. Without all of you we could not have made Mom's final wishes come true.
In keeping with Barbara's wishes, cremation has taken place and a private service will be held.
In lieu of flowers, if friends so desire, a donation in memory of Barbara may be made to CancerCare Manitoba or the Heart and Stroke Foundation. Make a donation to