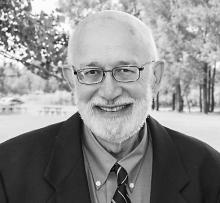 George passed away at home on September 23, 2021 after a brief illness.
George is survived by his beloved wife
Susan of 47 years, his son Peter, daughter-in-law Tara, grandchildren, Grace and Luke, dear sister Mary and husband Kosta Kolitsas, in-laws, Ralph and Suzanne Harling, Fred and Chrys Harling, Rosemary Chapman, Jon and Janet Harling and many nieces and nephews.
George was predeceased by his parents, Peter and Lemonia, Aunt Theadora and Uncle Paul Stachow, brother-in-law Gary Chapman and numerous relatives in Greece.
George was born in Athens in 1948. His parents saw educational opportunities for George and Mary and emigrated to Canada in 1956. George was a bright and eager student and excelled at school. George graduated from the University of Winnipeg in 1969. While working for Lloyd Axworthy at the
Institute of Urban Studies, George completed his master's thesis on "Public Policy for Downtown Redevelopment in Winnipeg" at the University of Manitoba in 1971. Later he worked for Aronovitch and Leipsic on special projects, followed by a directorship at
Heritage Winnipeg.
It was at Heritage Winnipeg that George met Bob Dambach from Prairie Public TV. Together they created some memorable
documentaries, beginning with "Pyramids on the Prairies", "Lake Winnipeg", "Assiniboine Park", "Mennonites of Manitoba" (for which he won a Telly award), "Portage Avenue", and "Built on Agriculture". It was a wonderfully creative time for George and he thoroughly enjoyed it.
George was a unique and gifted individual. He was forthright, opinionated, curious and a marvellous wordsmith, which he credited to his Greek heritage. He loved words, using them and explaining them to others. He was always ready with a question.
George enjoyed creating and fixing things and had quite an artistic flair. Photography was an enduring passion. He had a terrific eye and captured some beautiful moments for which our family is forever grateful. In his
later years George enjoyed gardening,
sharing custody of Peter's dog, Ramsey, and most of all spending time with his first grandchild Grace, affectionately called "Kiki". He will be missed!
Very special thanks to our neighbours, Dr. Wayne and Carol Manishen for helping us when we needed it most. Also thanks to Dr. Johnson and Dr. Jose at Grace Hospital. Most especially thank you to Karen Corrigan, case coordinator at Grace who went above and
beyond to help George come home for his
final days. Thank you to Father Nikolaos Tambakis for his prayers and support to George and our family.
A funeral service will be held at St.
Demetrios Greek Orthodox Church on
Wednesday, September 29, 2021 at 10:00 am. with burial at Brookside Cemetery.
Refreshments in the church hall following the burial.