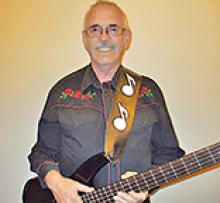 Peacefully on September 23, 2021 at Betel Home Foundation in Selkirk, Victor Borgford graduated to his home in Heaven. He will have no more sickness and pain and will have his new body to meet Jesus and his family and friends who have gone before him.
He will be with his Mom and Dad, Stebba and Gusti; and his older brother Steinie who predeceased him. Victor will be missed by his family - his wife Donna, of 52 years; children, Cherry and Tim; grandchildren, Tyler, Armanda and Jonathan (Corrina); great- grandchildren, Nevaeh, Taylor and Melaysia; brother Ben (Jona); sister Vangie (David); sister-in-law Barbara; honorary family members, Pat Main and Curtis Monkman; many nieces and nephews, as well as many other family members and friends.
Victor was born on August 16, 1939 at the family home outside of Arborg, MB. Victor loved music and taught himself how to play the guitar. He started playing in a band with his cousin Coleen, when he was 18 years old and played most of his life thereafter, only taking a break when the band members had young children. He also played in the band at New Life Community Church (now known as Springs Church - Selkirk) and also with other friends. Victor started his career teaching elementary school in 1965 in one-room schools in the Arborg area. He later went to university in Grand Forks where he obtained a Bachelor of Science in Education with a Major in Industrial Arts. He then taught Industrial Arts first in Fort Richmond Collegiate and then Acadia Junior High. In the early years when they lived in Winnipeg, Victor and Donna were avid travellers. They went on a round-the-world trip one summer during school break and other years travelled to many parts of Canada and the U.S. with a travel trailer that Victor designed and built. Later Victor and Donna moved to an acreage outside Lockport where Victor designed and built his own home. He also designed the interior of what is now known as Springs Church - Selkirk and was instrumental in building the interior and doing the finishing. It is a historic building, formerly a bus garage so the exterior could not be touched. Victor spent his summers hobby farming. Victor retired in 1997 and thereafter spent his time building or fixing things. We would always say, "Ask Victor, he will know what to do." He will be greatly missed by many.
Special thanks to all the wonderful people at Betel Home who looked after Victor so well and were like friends to him.
A celebration of Victor's life will be held at Springs Church Winnipeg, 725 Lagimodiere Blvd., on Saturday, October 2, 2021 at 11:00 a.m. with Pastor Ernie Goertzen officiating. Everyone is welcome to attend. Face masks are required. Interment will be Brookside Cemetery.
In lieu of flowers, donations would be greatly appreciated to Betel Home Foundation - Selkirk, Recreation Fund, 212 Manchester Avenue, Selkirk, MB R1A 0B6 (Victor loved all the musicians that they would bring in to play for the residents); to Youth for Christ Selkirk, 426 Clandeboye Ave., Selkirk, MB R1A 0X6, (Victor and Donna had a heart for the youth and many of them passed through their home at some time or other); or to a charity of your choice.

Please go to curtmonkman.com
to give condolences.