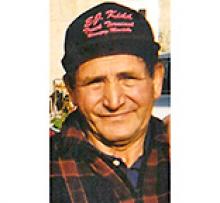 It is with great sadness that we announce the passing of John Macko of Teulon, MB at the St. Boniface Hospital, at the age of 83 years.
He was predeceased by his wife Betty Ann, parents, Nicholas and Ann, siblings, Marion, Pearl, Pauline, Olga, Nancy, Peter and Margaret, and son-in-law Brian.
John is survived by his daughter Teresa, son Jamie, grandchildren, Alyssa, Brendan and Tia, brother-in-law David, and many nieces, nephews and cousins.
John was born on a farm in Poplarfield, MB, as a young boy he always enjoyed the farm life. He was either helping his mother in the garden or hiking through the swamps and hay fields enjoying what nature had to offer.
At a young age, John entered the workforce by becoming a farm hand for Nuns in Arborg. He also had a job on a logging camp in Pine Falls cutting trees. When he was able to save enough money he continued his dream by buying his very own farm in Arborg. Then, one day at a barn dance at Crabby Steve's, John met the love of his life Betty Ann Pawluk and they got married in 1965. Then in 1969, they sold the farm in Arborg and bought a farm near Teulon, the hometown of his wife. While farming, John also held many jobs, some of which included loading and unloading trucks. He was a machine operator at Promo Wear and was employed for over 10 years at Northern Goose up until his retirement.
During his retirement, John still loved keeping busy cutting grass, gardening, cutting firewood, making perogies and most of all spending time with and spoiling his grandchildren.
John was a kind and generous man and will be sadly missed and not forgotten.
A funeral service will be held at Windsor Cemetery near Teulon on Thursday, September 30, 2021 at 3:30 p.m. for anyone wishing to attend.