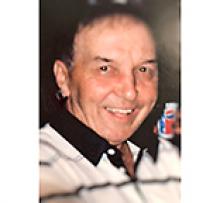 On Friday, September 24, 2021 at the age of 83, Harold, affectionately known by family and friends as "Happy Hal", passed away after a bravely fought but brief battle with cancer. Harold was born on March 19, 1938 in Bethany, Manitoba and grew up in Clanwilliam, Manitoba.
Harold was predeceased by his parents, Anasthasia (Nellie) Tanasichuk and Mike Tanasichuk, and his siblings, Annie, Walter, Metro (Matt), Terry and Alex. He is survived by Marg Woods, his spouse for the last 27 years whom he loved dearly, as well as his children, Cheryl, Lisa and Derek; stepsons, Scott and Jeff (Tracy); grandchildren, Anastasia (Brandon), Kayla and Justine; and great-granddaughter Violet.
Harold was a self-made man from rural Manitoba who came from very humble roots. Harold's incredible work ethic began as a young boy when he did what was necessary to help to support the family by selling eggs and the chickens his mom raised by going door to door in Clanwilliam. Harold also shot squirrels which earned him five cents a tail. As a teenager, Harold painted grain elevators and had a brief stint with the army when he joined up underage. When his mom realized what he had done she called the RCMP who located Harold and pulled him off the train on its way to bootcamp. Harold also worked at the Kenricia Hotel and drove cab in Kenora while also moonlighting as a bootlegger! In the mid 50s, Harold and his brothers, Alex and Matt headed up north to what eventually became Thompson to clear bush and work in the newly established INCO nickel mine.
On November 7, 1957, Harold married Rose Makowaychuk, a girl he met while living and attending school in Clanwilliam as a boy. Harold and Rose settled in Winnipeg, Manitoba where he raised his family. In the 60s, Harold worked in construction and as a gas/pipe fitter before starting A & H Petroleum Services Ltd. with his partner, Alan Young in Harold's backyard garage on Berry Street to service, repair and install gas pumps. Before long, the company grew, and they moved to a business location on Kensington Street in St. James. Harold and Alan sold their very successful company to their employees in 1989 and Harold retired and took up golf.
Having been a hard worker his whole life, Harold soon became bored with retirement and returned to work as the icemaker at Deer Lodge Curling Club where he worked until once again retiring for good in his mid-70s. Harold was an avid sports fan. He played hockey and baseball as young boy. He enjoyed watching the Bombers, Jets and Blue Jays games on TV. Harold was skilled at playing horseshoes, playing, and competing frequently with his father-in-law, Mike Makowaychuk earning several tournament championships together. He loved playing so much he even strung up lights over the horseshoe pits behind our cottage at Belair so he could play well after dark. Harold also loved fishing and spent many hours on the water with his father-in-law competing to see who could catch the first and biggest fish.
Harold also had a very successful curling career spanning 30 plus years which began when he was only six years old and would sneak in the back door at the Clanwilliam Curling Club after everyone had gone and practice throwing rocks. Harold made 25 provincial championship appearances. He won three Manitoba Mixed championships (1976, 1977, 1986) as well as the Senior Men's championship in 1989. His 1977 Mixed team won the Canadian Mixed title. His six trophies in the MCA Bonspiel include two Main events and a Grand Aggregate. Harold has been inducted into the Manitoba Curling Hall of Fame twice, initially in 2006 in his own right as a curler, and then again in 2018 when his 1977 National Champion Team was inducted, having compiled 11 wins, four losses record in the Manitoba championships and 11 wins and a single loss in the 1977 Canadian Mixed championships which was an impressive 22-5 record in Manitoba and Canadian play.
Harold was a very handy guy who could fix anything. The OG recycler he would try 100 ways to fix something before he would ever consider throwing it away. Harold loved golf and played often. He was even lucky enough to get a few holes in one. Next to CNN, the Golf Channel was his favourite TV Channel. Even on his last day, he was talking about golfing. Harold made the best perogies and they were always the first dish requested at every family dinner. He was a very talented wood worker, making and selling his creations which included turned candle sticks, bowls, plates, ice bucket, candle sconces, shelves and so much more. Harold also loved music. He taught himself to play guitar - he could never read music, just played by ear. We remember well listening to numerous jam sessions with Harold on guitar and his father-in-law, Mike Makowaychuk on violin. They regularly recorded their jam sessions on reel-to-reel tapes which will be forever treasured by the family. Harold was an amazing storyteller and relished every opportunity to share stories from his incredible life with family and friends.
He was a loving husband, father and grandfather, and a loyal friend. He was always there when you needed him. He always came when you called. No matter what. Harold loved his family dearly and he will be deeply missed.
In lieu of flowers, please consider a donation in Harold's memory to Curling For Life Endowment Fund or to a sports charity of your choice.
In accordance with Harold's wishes, cremation has taken place and no funeral service will be held.