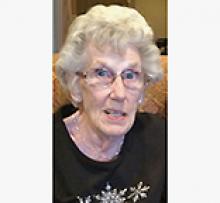 On September 26, 2021, Joan Elizabeth Williamson passed away peacefully in St. Boniface Hospital with her family by her side, at the age of 90.
She is preceded in death by her beloved husband David Williamson, who passed away on June 27, 2016.
Joan leaves behind her sister Margaret Foott and her brother Robert Ross. She is survived by her children, Richard (Jo-Donna), Bruce (preceded in death by Diane) (Michelle Shephard) and Linda (Wayne). She is also remembered by her grandchildren, Lindsay (Shaun), Melissa (Tyler), Jennifer (Jeff), Lana (Everett), Andrew (Kelsey), Morgan (Nicole) and by her great-grandchildren, Hunter, Kade, Silas, Landry, Tatum, Hannah, Lachlan, Lukas, Leila, Georgia, Jasmine and Abbie.
Joan was born in Winnipeg to Robert and Florence Ross in 1931 and she grew up in and lived all of her life in the East Kildonan area. She graduated high school and began to work at the Bank of Montreal on the corner of Portage and Main until her marriage to David Williamson in 1952.
As a stay-at-home mom, Joan lovingly raised three children, in a home full of love, caring and happiness. Later, when her children were older, she went to work at the Winnipeg Tribune until it closed and was then employed at the Winnipeg Free Press for many years until her retirement in 1996.
She was an avid animal lover and over the years has provided forever homes to dogs and many cats loving and caring for each one. She could never pass a cat or dog without patting its head and scratching it behind the ears. In later years, when she could no longer care for a pet, she still enjoyed petting and holding the pets of family members.
Throughout her life, Joan has always been a strong, intelligent, supportive and caring woman who liked to keep active, whether it was going for long walks or taking up interesting activities. She was a member of the Astronomical Society at the Museum of Man and Nature for many years, took up horseback riding lessons, took courses and classes in things that interested her and she loved working with her many plants. After Joan's retirement, she travelled a great deal including frequent trips to Victoria, BC to visit her sister's family, as well as to England and parts of the United States. She also enjoyed being a part of a bowling league at Rossmere Lanes and going out for coffee afterwards with team members and friends.
She loved Grand Beach where the family had spent a couple of weeks every summer while the family was growing up. In later years, she and her husband David would take drives there to have picnics and reminisce.
For the last five years, Joan has lived at both River Ridge 1 and River Ridge 2 in West Kildonan. We would like to thank the staff at both facilities for the wonderful care they provided to Joan during her residence.
The family would also like to thank all the staff at St. Boniface Hospital for their care and attention through her final days.
At the family's request, no services will be held. In lieu of flowers, a donation can be made in her name to The Salvation Army or The Winnipeg Humane Society.

We love you and will miss you greatly Mom.