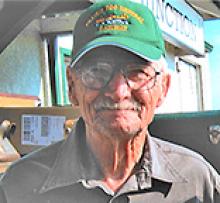 It is with profound sorrow that we announce the passing of Robert at the age of 92 on September 23, 2021. Robert passed away at the Grace Hospital after a short illness.
He is predeceased by his mother Margaret Simmons (nee Gildert), father Alexander Guiboch, sister Marie and brothers, Art and Lawrence.
Robert is survived by his wife Claudia, sons, Robert, Andrew (Malorie) and Tyler (Vanessa), grandchildren, Chloe, Emily, Larry, Charlie, Alex, Hailey, Kayla, and Kyle, as well as his sisters, Joyce and Anna.
Robert was born in Winnipeg at St. Boniface Hospital on April 8, 1929. He joined the Army and served in the Korean War. He had many interests, but loved trains and was a lifetime member of The Vintage Locomotive Society (Prairie Dog Central) where he started as a Porter then became a Breakman and finally the Conductor. He was also a member of the Lion Club.
Robert was a proud Metis.
The family wish to thank the nurses and Emergency Department at the Grace as well as the 3rd Floor South Staff for their care and compassion.
As per Robert's wishes, there will be no service.