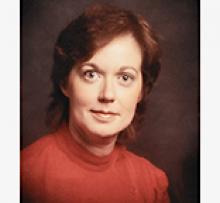 It is with deep sadness that the family of Carolynne Elizabeth Scott announces her passing at the Deer Lodge Centre on Sunday, September 26, 2021.
For over 40 years, Carolynne battled Parkinson's, but she did it her way and with incredible dignity, strength and fortitude. We never once heard Carolynne complain or say, "Poor me." Her amazing skills as a librarian, such as conducting research and asking pertinent questions, caused her to become very familiar with her illness.
Carolynne graduated in 1965 from St. James Collegiate and went on to complete her BA degree in English at the University of Winnipeg and her degree in Library Science at the University of Alberta. She was very well respected in her profession. Carolynne ended up moving to Calgary to pursue an exciting job as the manager of several library branches for the City of Calgary. It was here that she met the wonderful people of Christ Church Anglican Church. Carolynne's loving team of ANGELS from Christ Church surrounded her with love, support, care and did everything they could to assist Carolynne until her return to Winnipeg in 2007.
Carolynne was predeceased by her parents, Irene and Albert Scott, and her niece Alyssa Stevenson.
Carolynne leaves to mourn her passing, Gerald (brother) and Sue Scott, Elaine (sister) and Rick Stevenson, Deborah Scott (sister) and Andrew Ochonski, and numerous nieces and nephews; Andrew and Courtney Scott (Leah and Kenny), Laura Scott, Clare Scott, Derek and Natacha Forde Stevenson (Louka and Noah), and Jynene Stevenson and John Forbes.
Carolynne created special memories to cherish for each of us in our hearts. But she was by far known in our family as the "Founder of the Buddy Club". The Buddy Club was a very sought after and prestigious organization. Membership was by invitation only and you had to be at least three years of age to join. Members were treated to a multitude of special outings such as the Nutcracker performances, Breakfast with Santa and many cooking delights.
Carolynne absolutely loved musicals and her beloved Winnipeg Blue Bombers. She was so very talented and creative with many mediums but especially Crewel embroidery and crochet. Before her illness became too difficult to tackle certain things, Carolynne as an adult decided to take up tap dancing. She had a very keen mind, quick wit and could be very funny. She shone just being around her family.

When we lose someone we love, we must learn not to live without them, but to live with the love they left behind. Thanks for the love Carolynne, forever you will stay in our hearts.

The family would like to thank the staff at Deer Lodge Centre and especially 5 West for their tremendous care for and love of Carolynne over her 14 years there.
Flowers are gratefully declined. Those wishing to do so can donate on Carolynne's behalf to Parkinson Canada - Winnipeg Office, 414 Westmount Dr. #7, Winnipeg, MB R2J 1P2.
A funeral will be held at Chapel Lawn Funeral Home on Tuesday, October 5, 2021 at 10:00 a.m. Please RSVP to Chapel Lawn between 9:00 a.m. to 4:00 p.m. to attend the service as space is limited or for livestream information.