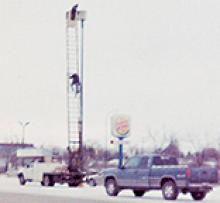 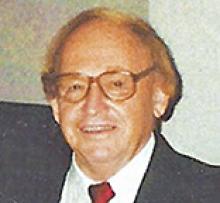 Passed away unexpectedly May 2013
Father and son working in harmony

Ever lovingly remembered by his beloved wife, Frances, beloved son Robert (co-worker on high buildings), and beloved daughter Tammy (her inspirational trek down and up the Grand Canyon embodied the family love of climbing, heights and the canyon). At the time of his passing, we were working on a neon electrical sign museum, and already had a major donation of a neon spectacular sign from Sign Friends, and a 3 acre property for it. The family corporation, Inter City Neon Plastic Signs and Services was his pride and joy, working with his wife and son 24/7 for 25 years, plus daughter Tammy, when available. We travelled all over Manitoba, east to Thunder Bay and simultaneously had a customer base in Winnipeg. We had memberships in the Winnipeg/Manitoba Chamber of Commerce, Sign Association of Canada, National Electric Sign, International Sign Association NALMCO (lighting contractors), developing friends throughout North America. He installed major signs at Portage and Main, as well as maintenance of them and other high rise buildings in Winnipeg, Regina and Calgary. From 1989, we travelled to the GTA annually in September spending time with clients, suppliers and sign companies and colleagues. We enjoyed and appreciated their friendship and support over the next 20 years and more, which led us to establish a second home close to the GTA lakeshore. He enjoyed his sign colleagues, or as he would call them, his "work brothers" and son, Robert, became a fellow work brother. He started in the sign industry at the age of 17 and always loved it. He loved the Lord and enjoyed attending with his family, a smaller church the last 5-6 years of his life and believed in doing special things for his community. Our home was full of love, music and laughter. Dick and our kids loved to sing and Robert and Tammy played several instruments between them, including piano. Dick strongly supported the Royal Winnipeg Ballet, the Symphony Orchestra, the Manitoba Theatre Centre, Cercle Moliere, Air Canada's Annual Dreams Take Flight, and Rainbow Stage and also enjoyed attending numerous functions at the Hitch 'N Post. He heartily supported Tammy's Ministry to Unwed Mother's she founded with YFC in Winnipeg and various camp work which included horseback and kayaking lessons, also son Robert's efforts with a coffeehouse ministry in Amsterdam and into the then Iron Curtain countries of Romania, Hungary and Czechoslovakia. Also Robert's tour of western Canada Junior High Schools 3 times/day, 5 days a week with Campus Crusade and Athletes in Action for a 3 month period in his early 20s, honing his skills on the keyboard. Robert had a high school rock band that he composed the music for and they practiced in our rec room regularly. Both Robert and Tammy had vocal lessons from Roy Petty when he returned to Winnipeg – having had his own TV show – he became a great friend to the four of us. His favourite saying was "I've been everywhere, travelled each and every highway, climbed to the top of a suspension bridge over a tributary of the Amazon on a family volunteer work trip in Ecuador, flew in a helicopter beneath the rim of the magnificent Grand Canyon, white-water rafted in Alaska, hot air ballooned in Albuquerque, flew the Big Bird over Carpathian Mountains to visit three orphans we supported, rode horseback in the Black Hills, handling both his and his four year old daughter's reins, cruised the Caribbean, Mediterranean, Adriatic and Alaska, enjoyed the night life of Paris and other major cities" and his favourite song was "Until Then I'll Go On Singing". Unfortunately, in September 2007, Dick had a medical emergency that affected the rest of his life. His grandparents always said he had a heart of gold, a total gem. He was predeceased by his beloved mother, Jenny (nee Vandorp) Boon and eldest namesake brother in infancy. He loved to yodel at the top of the skyscrapers, a life much loved and well lived.