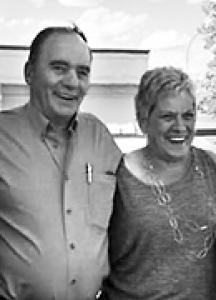 WATT: Ferguson "Fergie" November 17, 1946 – October 2, 2021 and Judy (nee Dunn) May 28, 1948 – October 5, 2021. It is with very heavy hearts we announce the passing of Ferg and Judy Watt. Ferg passed away suddenly, and Judy passed away shortly after with her children by her side after a courageous battle with cancer. Together they are survived by their son Scott Watt and granddaughter Alyssa Cameron; daughter Stacey (Darrell) Wakewich and grandchildren Abby and Caleb. Ferg is survived by his siblings Sylvia, Frank (Elaine) and Jack (Cydnie). He was predeceased by his parents Harold and Esther Watt, sister Alice Howatt and brothers-in-law Jim Kuharski and Gordie Howatt. Judy is survived by her siblings Bill (Janet) and June. She was predeceased by her parents Fred and Maude Dunn, sisters Carol, Lois and Irene and brother Arnold. Judy and Ferg are also survived by several wonderful nieces and nephews. Ferg and Judy both grew up on their family farms just outside of Alexander. Living in a small town, and both attending Alexander School, their lives crossed paths on many levels. They married July 11, 1968. After living briefly in Brandon, it quickly became clear they were both Alexanderites through and through. Ferg was a welder by trade and worked in Brandon at Metal Ind., Millco Steel and others before opening his own shop Alexander Repair and Sales in Alexander. Judy worked as the Postmaster in Alexander for over 35 years and was always willing to help in the community when needed. Ferg was an outdoorsman and was knowledgeable about all things hunting and trapping. His favourite place was Dunns Island where he spent countless hours hunting, fishing, exploring and finding a peaceful place when needed. Judy liked busying herself out in her yard, garden and of course her beautiful flower beds. She did have to keep up with the baking because she wanted to be prepared with coffee and dainties whenever they had visitors. In her relax time she enjoyed reading, knitting and playing scrabble with her friends on her trusty ipad. Judy and Ferg spent a lot of time together. They had enjoyed weekends travelling to the nearest harness race, and of course going to auction sales. As of late they enjoyed watching Blue Jays baseball and sitting on their front deck. 'Papa' and 'Nan', as they were known by the grandchildren, were wonderful grandparents. They were always interested in what the kids were doing in school, sports and travels. Papa and Nan loved the children and only wished them the best in their future dreams and endeavours. As Nan would say, "it's always a great day when the Grands come and visit!" Special thank-you to Palliative Care in Brandon for their excellent care and Cst. Bryan Oliver for his professionalism. A graveside service will take place at Alexander Cemetery on Friday, October 15, 2021 at 2:30 p.m. with Pastor Sam Souza officiating. In compliance with Public Health Orders, proof of full immunization will be required. In lieu of flowers, donations in memory of Ferg and Judy may be made to the Whitehead Fire Department, Box 107, Alexander, MB R0K 0A0.