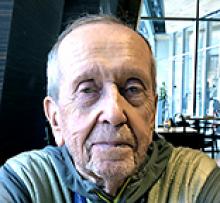 It is with sadness we announce the passing of Harlyn E. Thompson, 88, of Winnipeg, MB. Harlyn died peacefully on August 17, 2021 at Riverview Palliative Care after a brief battle with cancer.
Harlyn was born July 3, 1933 to Helmer and Ida Thompson in Fargo, North Dakota. He graduated from Fargo High School. He received his Bachelor of Architecture at North Dakota State University and his Master of Architecture at the University of Illinois, Champaign - Urbanna. He was an architect and an educator. After working in private practice in London, England and in Philadelphia with Louis Kahn he went into teaching. He was a professor at Kent State University, Ohio and a lecturer at Queen's University in Belfast, Northern Ireland 1966 to 1968. Harlyn was chairman of the Department of Architecture at NDSU. He went on to develop the school of architecture at the New Jersey Institute of Technology and was Dean. He came to Winnipeg in 1980 and was Dean of Faculty of Architecture at the University of Manitoba. In 1984 he was a visiting lecturer at the School of Architecture in Chongqing, China. He was a member of the Royal Architectural Institute of Canada.
After retirement Harlyn liked to "be on the move." He enjoyed travelling the world with an eye for how buildings were integrated into the environment and vice versa. Harlyn started a travel scholarship for architecture students at NDSU and a Lectureship Fund at the University of Manitoba. Harlyn volunteered with CESO working with indigenous cultures, projects in Moldova and Nepal and participated in an archeological dig in Tunisia. He was an active member of the Winnipeg Art Gallery, the Human Rights Museum and enjoyed the arts and music in Winnipeg. He was a big supporter of the NDSU bison.
Harlyn was preceded in death by his parents and his son Philip. He is survived by his wife Audrey, Winnipeg, daughter Leslie, Minneapolis, brother Merle of Indio, California, niece Vikki, California and nephew Scott, California and John, Hawaii and numerous cousins.
He preferred not to have a service and per his request his ashes have been scattered across the prairie.
Signing off with his legendary "Cheers."