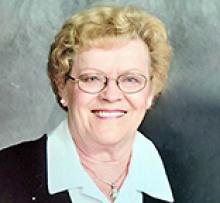 With heavy hearts, the family announces that Tonie passed away in her room at Tuxedo Villa, due to complications from COPD, at the age of 96.
Tonie is survived by her daughter Joanne Brown (Brad); granddaughter Erin Blair (Daniel); grandson Michael Brown (Mia Djuric); three great-grandchildren, Emily, Sara and Katie Blair, as well as many nieces and nephews and their families in Germany.
Born into a German speaking village, Wigstadl, Czech Republic, Tonie was the oldest girl and third of eight children who survived birth and she outlived all her siblings. The Second World War interrupted her youth and Tonie was sent to work camps, then unwillingly drafted into service. She twice escaped Russian prison camps before finding work at an American military base in Austria. After the war, she remained in Linz and was a nanny. Her village was essentially relocated to what became West Germany, in the Kitzingen region and she was briefly reunited with her family prior to leaving Europe to come to Canada, in search of a better life. She was the cook for the Eaton family in Winnipeg, making use of a program of domestic work to obtain Canadian citizenship.
Tonie met Jack, the love of her life and they married in 1954, with daughter Joanne joining them many years later. They eventually settled in Saskatoon in 1970 where they went on to make many deep friendships. Tonie was always baking or cooking and continually sharing her many wonderful German baking with others. She threw herself into volunteering first at Joanne's school, then as they joined the German Canadian Club Concordia where she was instrumental in creating a children's choir, helped found the dance group, sang in the adult choir, served on the Executive and was president of the Ladies' Group. Visitors to Folkfest would know Tonie as the one getting the dancing lines started!
Jack passed away too soon in 2007 and in 2009, Tonie decided to join Joanne in Winnipeg. This gave her an opportunity to be more involved in the lives of her two favourite people, her grandchildren, Erin and Mike. She loved her lunches out and shopping trips, even the 4 a.m. departures to Black Friday sales in Grand Forks.
Tonie kept the art of letter writing going until recently and has knitted her German nieces and nephews together by mail, serving as the matriarch to a large extended family. She valued family and friends, but special note to Joan, Johanna, Millie, Elfie and Elizabeth and many more. She continued to touch the lives of people locally as the wonderful staff of Tuxedo Villa have all been sharing stories of Tonie, her generosity and playfulness. Thank you to Rosemarie, Carmen, Hermie, Lindsay, Cheryl and many more who have really held her world together during the lockdowns from Covid-19.
Cremation has taken place and the family will hold a private ceremony. The family kindly requests that friends and relatives take a few minutes to honour her memory by visiting her tribute page at EthicalDeathCare.com. A photo-biography, as well as memories and stories published by those who knew her, are available there.
In lieu of flowers, Tonie would love it if you could bake something for someone, or volunteer your time!