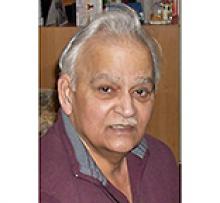 It is with great sadness that we announce the passing of Kenneth Ramlal on October 3, 2021.
He will be lovingly remembered and is survived by his wife of 64 years, Peggy; his children, Patricia (Patrick) and Wayne (Janet); his brother Frank (Ena); his Samlal cousins who were brothers and sisters to him, Rena, Vilma (Indar), Ralph (deceased), Rudolph, Sylvia (Albert), Kenrick, Gloria (Paul), Dennis (Omela), Amelia (Winston), Ramona (Ramsey), his cousin Rachel (Wilfred, deceased); his brothers and sisters by marriage, Eileen (Bill), Carol (Rolf; both deceased), Judy (Laurie), Bob (Peggy, deceased), Annakyn and Doug (deceased); many nieces, nephews, grandnieces, grandnephews, friends and extended family loved him for his kindness, generosity, intelligence and sense of humour.
Ken was predeceased by his mother Roonie; father Frank; father-in-law Leonard and mother-in-law Roberta.
Ken was born in Cocoyea Village, Trinidad on December 16, 1933. When he was five, his family moved to Palmyra Village, Trinidad. He graduated from Naparima College (High School) in 1951 with a Grade One Cambridge School Certificate. After finishing high school, he worked as a Refinery Lab Technician and then as an Elementary School Teacher until he immigrated to Canada in September 1955. He was a member of the Happy Hits Cricket Team in Trinidad and played cricket in Winnipeg for years. Ken immigrated to Canada to further his education at United College and the University of Manitoba. Following graduation, he worked as a chemist, including at the Geology Department of the University of Manitoba and at the Freshwater Institute. He spent many happy (and some frustrating) hours on the Wildewood Golf Course and was particularly proud of, and happy to relate to, anyone who would listen, how he made his hole-in-one on the third hole. His happiest times were those spent with family and he was a notorious kibitzer during the annual Christmas Trivial Pursuit games.
He married the love of his life, Peggy, in 1957 and they spent most of their married life in the same home, building a life and making a garden that passers-by often stopped to admire. His children benefited most by his guidance, compassion and kindness. Although he sometimes appeared to have a gruff exterior, he loved children and animals and they responded to him in kind. For someone who "hated" cats, his constant feline companion of the last 11 years, Arthur, says otherwise.
A Celebration of Life will be held in Spring 2022.
The family sends special thanks to the staff of Riverview Personal Care Home and the Grace Hospital for the kindness and care that they gave him during this past year and during his final illness.
In lieu of flowers, donations may be made in Kenneth Ramlal's name to the Heart and Stroke Foundation of Canada, Siloam Mission or a charity of your choosing.