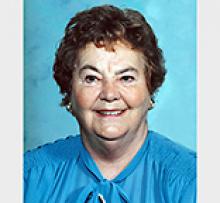 It is with great sadness that we announce the passing of Ivy Payne.
Ivy was born December 6, 1923 in St. James. Her father was a civil engineer and her mother a homemaker. She grew up on Brooklyn Street and later moved to Roseberry Street. There were seven children in the family, two boys and five girls.
As a child, Ivy had many friends. She enjoyed baseball, skating, jacks and reading old English children's magazines. She attended a number of schools, Britannia, Assiniboine and Linwood. As she grew older, Ivy was involved in Brownies, Girl Guides and CGIT. She loved the family camping trips to the US.
After high school, Ivy attended the Dominion Business College in St. James and went on to work at Winnipeg Electric for eight years.
Ivy married Stanley E. Payne in June of 1949. Stan worked for the CNR. They were married for 56 years until Stan passed in 2006. They bought a house in Norwood and had three children, Gary, Gail and Shirley. They spent two years in Montreal then returned to Winnipeg, settling in St. James. They saw many Canadian cities due to Stan's work. They loved to travel and enjoyed their times in Hawaii and California. They were also great hosts, entertaining their many friends and family.
When Ivy had time to herself, she enjoyed knitting, needlepoint, reading, gardening and baking. They also liked to golf and take evening walks. If she went out to eat, she always enjoyed a good feed of pickerel.
Ivy spent the last ten years of her life at The Westhaven, where she made many friends. The family would like to thank the staff at The Westhaven for their support and care of Ivy, as well as all the home care staff, especially Helen and Mariella, who took great care of her.
She was predeceased by her parents, Charles Lewis West and Eileen Winnifred "Nellie" West; husband Stan (2006); daughter Shirley (1957); as well as her sisters, May, Edna, Hazel and Sylvia Rae and brother Lew.
Ivy is survived by her son Gary (Crystal); grandsons, Steven (Alysha) and their daughter Charleigh and John and his fiancé Stephanie; daughter Gail Brazer; her brother Stewart (Gwen) and many nephews and nieces.
There will be a private interment followed by a reception open to all friends and family. Reception will be held at Chapel Lawn, 4000 Portage Avenue on Tuesday, October 19, 2021 at 2:30 p.m. For those who wish to join, please RSVP to Chapel Lawn between 9:00 a.m. to 4:00 p.m.
In lieu of flowers, donations can be made to the Heart and Stroke Foundation or a charity of your choice.