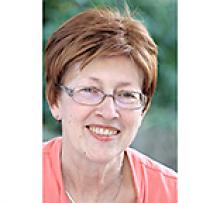 Sadly, our beloved Madeleine passed away on September 28, peacefully and surrounded by her family in Gimli Community Health Centre.
She was predeceased by her parents, Emile and Germaine Schiller and her parents-in-law, Abram and Margaret Barg.
She is survived by her husband of 46 years, Walter; her children, Matthew (Cassie), Lindsay (Gregg) and Graham; her grandchildren, River, Soren, Marie and Hazel; and her seven siblings, Denise, Rita, Jean, Annette (August), Claire, Peter (Barb) and Ray (Wenda).
Cremation has taken place with interment to occur at a later date, at which time a memorial service will be held.
Madeleine was born in North Battleford and raised on a farm near Delmas, Saskatchewan. After completing high school, she moved to Saskatoon for a few years before moving on to Winnipeg in 1972, where she met and wed Walter. Madeleine and Walter shared a unique and admirable bond, demonstrating what it truly means to be life partners and teammates.
Madeleine was a lifelong artist and although she was unable to indulge her passion in her early years, she made up for it in later years after her marriage and a move to Gimli, an art-loving hotbed in Manitoba's Interlake. She won numerous awards in oil painting, watercolours, pastels and coloured pencils at many local art shows, as well as the Red River Exhibition and Manitoba Society of Artists. There was nothing she liked better than an afternoon spent painting in the countryside around Gimli with her good friends Kathy and Eleanor.
In 1989, her life was permanently altered by a brain tumour, which initiated health issues that would last for the rest of her life. Despite this, and with her husband often away from home teaching in Northern Manitoba, she was able to raise three wonderful children and continue to pursue her artistic ambitions, mainly in Gimli, where the family finally settled and established itself. She even ventured to the North with her husband, enjoying a number of winters in the First Nation community of Shamattawa.
Her final, and possibly most devastating, health issue was a stroke in 2014 which pretty well dictated an end to her artistic career, really just as it could have been about to blossom, and which resulted in a gradual but inevitable decline in her health. Nonetheless, she was a fighter with an incredible will to live, surviving far beyond what she might have, and was often called a "miracle lady" by her health care providers. We, her family, consider ourselves privileged to have had her with us for 32 years after the brain tumour in 1989.
As the poem says, "We're not sad that she's gone, we're glad that she was here."
The family wishes to thank the staff at Gimli Community Health Centre and Gimli homecare services for the care they provided for Madeleine, and especially Dr. Adegbesan and Madeleine's nurses for the exceptional professionalism and compassion they showed toward Madeleine.
In lieu of flowers, please make a donation to your favourite charity or the Gimli Community Health Centre.