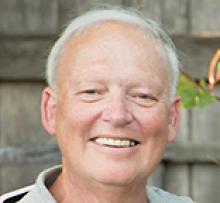 David Lawrence D'Andrea (Dave) passed away peacefully with his wife by his side on September 16, 2021 at Riverview Health Centre at the age of 70.
David is lovingly remembered by his wife Ann Tyre; his sons, Michael and Stephen D'Andrea; Mark Falco (Toronto), Paul Falco, and granddaughter Chloe Falco.
He also leaves his brother Bruce and wife Jane (Ottawa); nephews, Andrew and Iain Crump, as well as many beloved family and friends.
David was born and raised in Lachine Quebec, attending Sir George Williams (Concordia University). He came to Winnipeg to attend the University of Manitoba briefly before becoming a proud member of the Winnipeg Police Service. In the latter part of his 33 year career with the WPS he mentored and sought to create a supportive environment for those with whom he worked .
David loved sports, particularly golf, tennis and badminton, and played in the International Police and Fire Games in Calgary, and the Canadian Police and Fire Games in Regina.
One of his many pleasures was the weekly badminton league played at the Police Academy, usually followed by refreshments at DJ's on Portage Avenue. He got great pleasure playing golf with his sons, nephews, brother-in-law and friends from work. As a follower of sports he was a staunch "Habs" fan, only eventually warming up to the Jets .
His love for music was well known; many received play lists of their favourite tunes, and all get-togethers - be it playing cards, swimming, or celebrating some event or other, were enjoyed against a background tapestry of music he created.

You made life rich.
We needed your wisdom, your opinions,
your smile and your love.
You mattered.

Special thanks are extended for the superb care and support by the staff at CancerCare Manitoba, the Palliative Care team, the Palliative wing of Riverview Health Centre, and MAID - and to each and every friend who gave their unwavering support and love in his final days; he counted himself lucky to have you in his life.
And last, but by no means least, our heartfelt gratitude to the members of the Winnipeg Police Service for the deeply touching tribute on David's final day. You gave him wings.
Honouring David's wishes there will be a Celebration of Life at a later date.
Donations may be made to CancerCare Manitoba Foundation, 1160 - 675 McDermot Avenue, Winnipeg, MB R3E 0V9.
Make a donation to