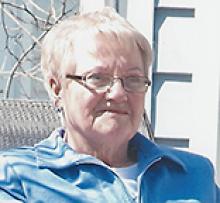 It is with great sadness that the family of Terry Quinn announces her passing on Sunday, September 26, 2021, at the age of 93 years.
She will be greatly missed by her brother Harry and her sons, Rick (Susan) and Chris. Terry's memory will be cherished by her grandchildren, Christi (Alex), Ian (Elissa), Arianne (Lisa) and Paul (Shannon); five great-grandchildren, Cameron, Ethan, Aiden, Owen, and William; niece and nephew, Laura (Alex) and Barry and a great host of friends. Terry was predeceased by her parents, Selma and Rudolph Claassen; sister-in-law Marie and infant son Grant.
Born on December 31, 1927 in Winnipeg, MB, Terry spent many years raising her family, working for the Royal Bank of Canada and travelling abroad. She was a devoted member of North Kildonan United Church and served many posts as a dedicated volunteer for multiple Manitoba bowling associations.
Ten pin bowling was Terry's passion. Most notably, she was the first woman to bowl a perfect game in Manitoba's history. She represented Canada at the Bowling World Cup in Venezuela in 1974, placing 12th in the world. In 1990, Terry was inducted into the Manitoba Bowling Hall of Fame.
We love our Grandma-T and will miss her vibrant, cheerful presence. Her happiest place where she spent all of her retirement summers was at the family cottage at Winnipeg Beach. As per her wishes, there will be no formal service. Her family will continue making new memories at the cottage in her honour.
Flowers are graciously declined and those who so desire, may make memorial donations to a charity of their choice.

Condolences may be left at
klassenfuneralhome.com