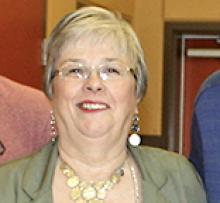 It is with extreme sadness we announce the peaceful passing of our wife, mom, grandma, great-grandma, sister and aunt on October 2, 2021 at the Women's Hospital.
Ruth is predeceased by her parents, Harry and Marge Alcock; sister Marlene Wiess; brother Peter Purser (England); brother-in- law Leslie and nephew Joshua.
Ruth is survived by her husband Brian; her daughter Lisa Magalas (Scott) and her son Rob; her grandchildren, Zack (Sarah), Holly (Justin), Ryan (Kylie) and Tanner. Also her great-grandchildren, Kailey, Damian, Addy, Mason, Finna, Julie and Robin; her sister Carole Alcock and her sister-in-law Louise Halldorsson (Darryl). Ruth will also be missed by her current three foster girls, Lily, Tara, Kourtney and long term adult foster daughter Tina, as well as several nieces and nephews (including those in England).
Family was everything to Ruth and being a grandma and great-grandma was one of her proudest accomplishments. Ruth was the rock of the family and made every occasion special. She was caring, compassionate, an advocate for others and the best listener without judgement.
Ruth was born in Selkirk, Manitoba. Ruth was married to Brian on May 1, 1965. Ruth has primarily spent the majority of her life caring for her family and children in care. Ruth created strong relationships with the children she cared for, including her foster children. Throughout the years, she remained in regular contact with many of the children she cared for. Ruth was very proud of the children she cared for and enjoyed immensely seeing them grow up.
The family is extremely grateful for the love and support Tina has given to Brian and Ruth, especially during this challenging time with Ruth's brief battle with cancer. Thank you also to CancerCare HSC and to the compassionate staff at the Women's hospital (nurse Sandra.) Ruth was an avid Winnipeg Jets fan and hockey grandma. Ruth is well known for her cooking, baking, gardening, and canning.
In lieu of flowers, donations will be accepted for Winnipeg Jets Hockey Academy.