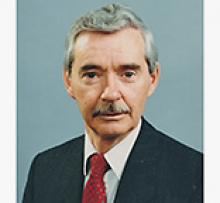 John Robertson Daly died peacefully on October 5, 2021 in Winnipeg. He was born in the NE Section 27-1-14 WPM Roblin Municipality to Clarence (Sia) and Helena (Robertson) Daly. He was the younger brother of Nora and Gordon.
He grew up in a loving family where music and church were important in the communities of Mather and Cartwright. He recalled the difficult challenges of the 1930s and sometimes going to school with a lard sandwich. He believed he set the Guinness Book of World Records for the lowest marks in his failing year of Grade 12 at Cartwright High School. All he could think about at the time was being a Spitfire pilot. However, with his height, he would likely have ended up as a tail gunner in a Lancaster and lasted three weeks. Instead, he was the Flight Sergeant of the Cartwright Air Cadets. Fortunately, the war ended a month before his 18th birthday.
John farmed with his father in the Cartwright/Mather district. In 1950, he met a beautiful and stylish school teacher named Norma Dreger. They were married in 1952 and proceeded to have the first two of their five children. The financial institutions at that time made it difficult to borrow money to enlarge the farm and to purchase his own farm equipment. Consequently, they changed their plans and moved to Winnipeg in 1956 where John completed Grade 12, a Bachelor of Agriculture Economics and an Honours MSc degree redeeming his academic pursuits 15 years later. Norma taught school to support him during his university years. After the degrees were granted, a son and identical twin daughters were born.
John did not forget about his love of flying and with his first pay cheque began private flying lessons. He worked for the Province of Manitoba in the Assessment Branch, Canada Land Inventory, Crown Lands and finally Department of Agriculture as a Resource Agronomist for the Central Region.In this position, he helped form several soil conservation groups with farmers. They oversaw the planting of thousands of trees to mitigate soil erosion. John also worked to prevent subdivisions of valuable agriculture land to growing urbanization. He was heavily involved with the Municipal Councils and the Boards of Planning Districts. John enjoyed his work and valued the long-term friendships with many professional agricultural colleagues in his retirement.
John's Christian faith, singing in a church choir from age 15 to age 80, and his volunteer work with the Touchstone magazine were important to him. Music played a huge role in his life from birth to death. He was the soloist at many weddings. The Saturday afternoon 'Metropolitan Opera' radio broadcast was a constant in his life.
John was inventive, fixing and creating things in his workshop. Many of his creations were practical but not necessarily beautiful and were given the name, "John's farm fix" by his children.
Following the example of his father, John was concerned with the income inequities in society. He was a Director and Secretary of the Cartwright Consumers Co-op at age 19 and on the Board of the Morden Credit Union and the Hyline Credit Union in Winnipeg during his working years. He read two newspapers every day and often wrote letters to politicians stating his views.
Camping across Canada with Norma and their three younger children was a particular delight. John and Norma also made three trips to Europe where he was always sure to visit the air museums.
John demonstrated love by example. The values he instilled were love, kindness, honesty, hard work, hospitality, citizenship, friendliness and being interested in the world. He lived a full and joyful life and was married to Norma for 68 years.
Left to remember him fondly are his wife Norma; Gerry (Ovide), Donald, Sean (Janice), Barbara (Dale), Shelagh (Rob); and his grandchildren whom he so enjoyed: Kieran, Seamus, Ainslie, Breton, Caelan, Meara, Erin, Kyla; in-laws, cousins, nieces, nephews and friends.
A Celebration of Life will take place in December.
The family would like to thank the staff at the Deer Lodge Centre for the care they provided in his final days.
Should you wish to make a donation in his memory: CancerCare Manitoba Foundation, Room 1160-675 McDermot Ave., Winnipeg, MB R3E 0V9, The Cartwright and Area Foundation, P.O. Box 114 Cartwright, MB ROK OLO or a charity of your choice. Make a donation to