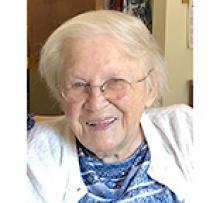 It is with sadness that we announce the passing of Alice Adeline Agnes (Harpe) on October 2, 2021 at the age of 101.
Alice Adeline Agnes (Harpe) Lindal was born to Sarah (Campbell) and Wesley Harpe on September 28, 1920 in Parry Sound, Ontario.
When she was a young girl she moved with her family to Pikwitonei (#214 on the railway line) where her Dad worked for the railway. Growing up with her brothers and sisters in the North was a joyful time as she learned to fish and hunt and she treasured many happy memories of shared time with her siblings in #214.
Alice met, fell in love with, and married Emil (Duke) Lindal in 1939 and they made a home together in Ilford, Manitoba where they started a family with hard work and lots of love. They later moved to The Pas where Duke built a large family home with their first indoor flush toilet, which was a real hit with the family. Duke was away a good part of the year as he had started a freighting company and fishing business in the North and was busy farming in the Carrot Valley community here. Alice helped with the farm and became a foster Mom in which she provided a caring home for nearly 100 foster children who were in transition. She actually became a permanent Mom for two of these precious sons. Alice, in spite of having lived through many hard times, including the Second World War and the polio epidemic which disabled her precious oldest daughter, learned to rely on her faith in God to strengthen her. Alice had also lost two infants at birth. In April 2000 Mom had to say goodbye to her dear husband Emil (Duke) Lindal who passed due to respiratory and heart conditions. They had lost their eldest son, Lloyd Emil Lindal in 1963 who was a pilot in a plane crash. In 1977, Bernice (Lindal) Kecskes, their oldest daughter sadly passed away due to pneumonia; and their son, Kenny Lindal, was lost to a drowning incident in 1978. They then had to say another sad goodbye to daughter, Joan (Lindal) Corman and their grandson, Chad Corman, in 1993 due to a fatal car crash. Alice also more recently, just two years ago, lost her dear granddaughter, Terri (Clarke) Dowhy. Despite all the hardships and losses through the years she learned to lean on God and trusted in her strong faith to sustain her. Alice taught her children and grandchildren to rely on God, too. She would often sing songs of praise and encouragement while doing her daily chores and shared them with her family. She volunteered at the local hospital auxiliary to do her part to contribute to her community, and she became one of the first founding board members at The Pas Alliance Church and taught Sunday School there for many years.
She created a legacy of love and exemplified unconditional love and a strong faith to all of her family and friends and community. Alice spent her last few years residing in a nursing home in Winnipeg and has had to endure restricted visitor limitations. This was such a difficult time for her. She celebrated her 100th birthday last year by social distancing with her children. She even caught Covid-19 in December 2020 in the care home and was able to fight through it. Even through the hard times she never gave up on the hope of Heaven someday. Alice said that there was more children waiting for her in Heaven than here on earth.
A small funeral/graveside service for Alice Lindal will be held at a future date.
If friends and family so choose they can make a donation to The Pas Hospital Auxiliary or a charity of their choice.
Alice treasured each one in her family, both those gone before and those here on earth .
She is survived by her son Donny Lindal; her daughter Loretta (Lindal) Clarke; her son Jim Lindal (Jessie); and her daughter Patricia (Lindal) Wilchowy (Danny); foster sons, Steven Colomb and George Miles; and numerous grandchildren, great, and great-great-grandchildren; along with many relatives including sister Bernice (Harpe) Hilton and brother Clarence Harpe; and many friends.

Welcome to your heavenly reunions Alice. "Until then!" Rest In Peace!