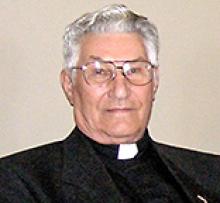 Father Edward Kwiatkowski was called home to our Merciful Father on Thanksgiving Day, October 11, 2021 at the age of 92, and one month short of his 26th anniversary to the priesthood.
Born in Elphinstone, MB of parents, Michael and Eudokia (Labay), he was the eighth of ten children; now only his sister Marge survives him. His was a "late" vocation: happy years of childhood and early adulthood spent on the farm segued to marriage to Phyllis Zemliak, leading to a remarkable whirlwind of adventures in Morden, Winnipeg, Rossburn, The Pas, the Esterhazy mines, and eventually Brandon, all the while raising seven children. On retirement, he chafed to do more for the Lord with his new spare time. His vocation to the priesthood, always thought impossible because of his humble beginnings, crystallized at this time and he undertook seminary studies in Rome. Completing these, an invitation to serve in Ukraine led to service there both before and after his ordination to the priesthood on November 12, 1995.
He was immensely grateful to the Lord for giving him over 25 years of priesthood, during which he served in Manitoba (Roblin/Russell district), Victoria, BC and a summer in Kenora, ON. He returned to Winnipeg to assist in his retirement years his son, Rev. Fr. Michael Kwiatkowski. Four months ago, a new tiredness was diagnosed as leukemia, and after a short and prayerful battle, he died just as the daily family online rosary by his bedside ended.
The family is extremely grateful to Dr. Baher Kilada, St. Boniface Hospital adminstration and staff, Palliative Care, and WRHA Homecare personnel.
Priestly Parastas will be celebrated Thursday, October 14 at 7:00 p.m.; funeral Divine Liturgy at 10:00 a.m. Friday, both at Blessed Virgin Mary Ukrainian Catholic Church, Winnipeg. Interment to follow at Holy Family Cemetery, Winnipeg.
Livestream link: live.blessedvirginmary.ca.
This obituary may also be viewed on Korban Funeral Chapel website.