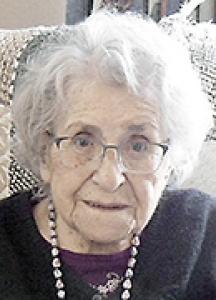 MACKENZIE (nee SIMPSON), Mary Delma "Del", passed away with family by her side, at the Wawanesa Health Centre on Tuesday, October 5, 2021 at the age of 99 years. Mom was born on April 28, 1922 in Ituna, SK. She moved to Ninette to work at the Sanitorium and met her future husband Dougald. They were married on October 8, 1949. They lived on a farm near Hilton, MB until 1956 when they moved to Ninette. Mom remained there until October 13, 2020 when she then moved to the Wawanesa Personal Care Home. She then worked as a cook at the Ninette Sanitorium, Kent's Construction and as well as the Ninette, Belmont and Killarney hotels. She also worked for Home Care. In later years, mom and dad also became foster parents to many children, three of whom remained a part of the MacKenzie family. Mom leaves to mourn her passing her children, sons Dennis (Judy) of Vermillion Bay, ON, Darold (Shari) of Ninette, MB, Duane of Winnipeg, MB, and daughter Diane (Brian) McDonald of Ninette; ten grandchildren Adele, Dawna (Brad), Kevin, Joni (Nick), Stacy (Jon), Shawn (Amanda), Megan (Lance), Tyler, Michael, and Crystal (Michael) and ten great grandchildren, Dawson, Rylie, Halle, Branson, Carlyn, Sam, Ryder, Kaeden, Kolby and Isabel. She is also survived by foster sons Vince and Bart Mintuck and many nieces and nephews. Mom was predeceased by husband Dougald (1992), mother Rose Simpson (1992), son Donald (2019), daughters-in-law Shirley & Jenny (2013) and by foster son Terry Mintuck (2021). A Family Graveside Service will be held at the Ninette Cemetery on Saturday November 13, 2021. Memorial donations can be made in Del's memory to the Ninette Cemetery Memorial Fund, Box 112, Ninette, MB R0K 1R0. The family would like to thank the staff at the Wawanesa Personal Care Home for the excellent care given to our mom. Friends may sign the memorial register book by emailing jamiesonsfuneral@gmail.com or by calling 204-827-2480 and we will insert your name.

Online condolences can also be made by visiting www.willmorchapel.com.

Jamieson's Funeral Services of Glenboro in care of arrangements.