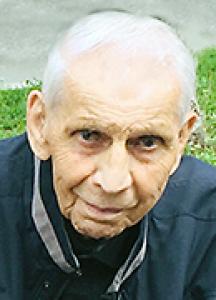 GREGOR: William (Bill) Gregor died peacefully surrounded by his family on October 13, 2021 at the age of 95. Bill was born January 1, 1926 on a farm north of Roblin, Manitoba to Mary and Dmytro. After finishing school and working on the farm, in 1944 Bill enlisted in the Infantry. After leaving the army in 1946, he was able to attend vocational school where he trained as a welder, machinist, and tractor mechanic. After completing his courses, he went on to work for Frank Lawsons and Sons in Brandon. While working at Frank Lawsons, he met and married Loreen McKinnon in 1954. They had two children, Carla (1956) and Dean (1958). In 1969, he joined White Farm Equipment, and in 1975, he went to work at Cancade Manufacturing. He ended his career there in 1988 as the Plant Manager. Bill's wife, Loreen died in 1982, and in 1984 he married Lila (Rookes). Lila and Bill enjoyed 37 years of marriage together. Bill remained active in his retirement, going every day into the shop at the Ballingall Brothers, a space generously donated by Todd and Jason Ballingall, to work on his various projects until the age of 92. At the time of his death, he was living independently in his own home, with support from his wife, Lila. Bill was a talented machinist, welder, creator, and inventor. He loved solving problems and sharing his knowledge and skills with others. One of the highlights of his life was his induction into the Manitoba Agricultural Hall of Fame in 2016, in recognition of his many years of service to the agricultural industry. Throughout his life, Bill's talents and passion for innovative mechanics were used in the service of others. Friends and family will remember with fondness, Bill's many talents for "building and fixing things", his generosity, his determination, dare we say stubbornness, and the love of his family. He will missed be more than words can express. Bill was predeceased by his first wife, Loreen, his brothers, Russell, Michael, and Adam, his sisters Lena, Alice, and Rose, and his stepson Rob. Bill leaves to cherish his memory: his wife, Lila, his daughter, Carla (Tom), his son Dean, his step daughter Laurie (Darryl), his grandchildren Dustin(Tiffany) Kayla (Kris), Jacqueline (Eric) and Ryan (Haley) and his great grandchildren. He is survived by his sisters, Mary and Vicci and his sister in law Jean, and many nieces and nephews. The family would like to thank the staff at the Assiniboine Center for their care. Carla and Dean would also like to thank Lila's family, her daughter, Laurie and son-in-law, Darryl, her grandchildren, her sisters, brother, nieces and nephews for making Dad a member of their family after his remarriage. Donations in Bill's memory can be made to The Dome Building Sustainability Fund either online at provincialexhibition.com, or in the mail to The Provincial Exhibition of Manitoba, Unit 1A, 1200 - 13 Street, Brandon, R7A 4S8. At Bill's request there will be no funeral.