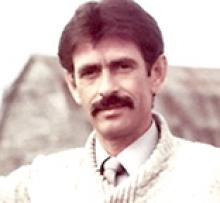 Born in Hamiota, Manitoba, to Frank and Hazel Jamieson. The second born, to which later, would be 12.
While growing up, the family would move many times. He left school at a young age to help support the family. Robert had a few jobs as a young boy and teenager. Later on he entered a hairdressing school. He graduated as a stylist, which became his life career. He was a natural and became very successful. Robert was able to travel extensively, with this career. He decided to settle in Sechelt, BC and set up shop. He became very well known, because of his artistic talents with hair. He also took great pride in his community. Volunteering his time to the Lion's Club, DBA, and the Royal Canadian Legion. Frank and Hazel were so proud of him when he was voted in as President. The first openly gay Legion President.
We starting living together in January 2000; then married in November 2008. Ours was a great relationship of honesty, faith in one another and complete respect for one another. I miss him terribly!
If any of you reading this would like to honour him, please donate to your local Heart & Stroke Foundation in his name.