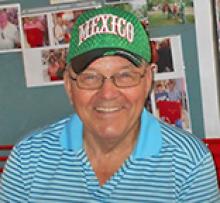 It is with sadness that the family announces the passing of Donald, at the age of 76 years.
He will be sadly missed by his wife Claudia of 54 years; son Grant (Kerrie) and grandchildren, Trey and Jenna; daughter Jackie (Darren) and grandchildren, Brock and Connor and his sister Irene Sellen.
He was predeceased by his parents, Raymond and Ruth.
Donald was born on June 6, 1945 and was raised and lived his entire life in OakBank. He served with the Canadian Infantry in Germany from 1963 until 1966. Upon his return, he married Claudia in 1967 and started their family. He worked with Sellen Brothers and Silverbirch Construction. He loved carpentry and working with his hands. He was meticulous and precise with every project he took on, including his well known Adirondack chairs, footstools, tables and puzzle boards.
Donald was a huge supporter of his children and grandchildren and loved to watch them play hockey. There will be a huge void at the corner of the rink where he stood to watch and he will be missed by so many.
At Donald's request, cremation will take place and there will be no formal service. Donations may be made in his memory to CancerCare Manitoba or a charity of your choice.
Family and friends are invited to leave condolences, share memories and view his life in photos by visiting Donald's memorial page at seasonsfunerals.ca
Make a donation to