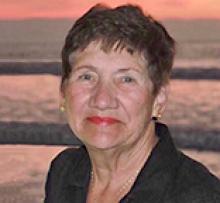 In the early afternoon of October 9, 2021, surrounded by family at the Agape Hospice in Calgary, Sheila went to her Lord and Saviour.
Sheila was born on April 17, 1936 in Winnipeg, the first born of Douglas and Theresa Foster. She grew up in Winnipeg and attended St. Mary's Academy and went on to get her BSc. at The University of Manitoba (St. Mary's).
Sheila worked at St. Boniface Hospital as a laboratory technologist and attended the prestigious Cornell Medical College in New York to receive her certificate in cytotechnology. She met David through the youth group at St. Alphonsus Parish and were married on June 29, 1963 at St. Alphonsus Church in Winnipeg. Four children soon followed, along with a move to Calgary, where Sheila and David would settle and raise their kids. Sheila worked with Calgary Laboratory and then Kasper Labs for many years.
Sheila was a force of nature, leaving an impression on everyone she met. Her zest for entertaining and hosting parties for family and friends will long be remembered. She was very involved in the community, becoming a lifeguard with the City of Calgary, volunteering with the Girl Guides, being an active member of the Catholic Women's League (CWL). She had a very strong faith and was heavily involved in St. Luke's Parish along with David. Sheila was also very supportive of her children's activities. She can fondly be remembered for driving countless kids to and from their sporting events. Always involved in organizing team snacks and helping with tournaments, kids in her car were always rewarded with a slurpee after games! The entire Calgary soccer community has heard her cheering loudly and proudly from the stands!
In addition to her husband David, she will be lovingly remembered by her four children, Scott of Las Vegas, NV, Andrew (Leanne) of Calgary, Jennifer Wieninger (Michael) of Edmonton and Trevor (Kelly) of Calgary. Sheila will also be remembered by her seven grandchildren, Drew and Finn Stanley (Scott), Helen and Annette Stanley (Andrew), Grace and Jack Wieninger (Jennifer) and Ava Stanley (Trevor). She will also be greatly missed by her siblings, Brenda Yost (Allen) of East St. Paul, MB and Ken Foster (Susan) of Calgary. She will be fondly remembered by several other family members and close friends too numerous to mention. We will miss her terribly but know that she is in a better place.
Funeral Mass was celebrated at St. Luke's Catholic Church on Friday, October 15, 2021 at 11:00 a.m. Photos, memories and condolences may be shared with Sheila's family through www.evanjstrong.com