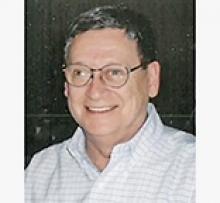 The family of Michael Allan Derwin is saddened to announce his peaceful death on September 28, 2021 at Saint Vincent's Nursing Home, Halifax, with his faithful wife by his side.
He is survived by his wife Sheila Donahoe; his children, Christine and David (Melanie); his grandchildren, Rebeca Derwin-Garcia, Nathan and Kohan Derwin; and his former wife Lilly Hanke.
Michael was born in Winnipeg on November 21, 1945. He was educated in Winnipeg including at Saint Boniface Collegiate, Saint Paul's Collegiate, and the University of Manitoba. He had an eclectic employment history which included teaching (Libau and Fisher Branch, Manitoba) and the federal employment Local Initiatives Program in Winnipeg and Halifax.
He moved to Halifax in the eighties where he worked for the Registry of Deeds prior to starting his own business, A Matter Of Fax, which he ran for many years. He then joined Sam the Record Man and spent his days listening to and promoting the best classical music. This also gave him the opportunity to add to his prodigious compact disc collection which numbered in the thousands and brought him much pleasure.
Michael had a love of the French language, French literature, art, and travel, all of which resulted in a huge library of exceptional books. He enjoyed travelling with Sheila to France, England, Ireland, and they took many trips to Palm Beach Shores, Florida, in recent years. It was there he had a chance to spend quality time with his children and grandchildren.
He and Sheila spent their summers at The Old House on Prospect Bay, a cottage to which Michael devoted many hours of manual labour towards restoration and also hours mowing massive fields, a role he particularly loved. He will be greatly missed by Sheila and her family, his children, grandchildren, and many nieces and nephews.
Thanks to Bayshore Home Care and Saint Vincent's Nursing Home staff who made Michael's last years comfortable as he lived with COPD and dementia. In Michael's memory, donations may be made to Saint Vincent's Nursing Home, Sacred Heart School of Halifax, or a charity of your choice.
Michael's funeral will be held at Saint Agnes Church, Mumford Road, Halifax, NS, Saturday, October 23, 2021, at 11:00 a.m. with Father Albert Cosgrove officiating.