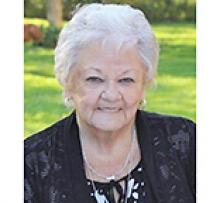 It is with great sadness that we announce the passing of our dear mother, stepmother, grandmother, step-grandmother, great-grandmother, step-great-grandmother, sister and friend to so many. Alice passed away October 4, 2021 at the Health Sciences Centre, with her daughter by her side.
Alice is survived by daughter Anita Procter (Randy Benson); grandchildren, Nicole Benson (Andrew), Bryce, Tiara and Taylor Benson; great-grandson Elias; stepdaughter Beverley Brindley and stepson Clifford (Judith) Morrison; step-grandchildren, Jackie (Doug), Valerie (Cory), Mary (Darren), Karen (Jeff), Jillian (Steve) and Carl (Shayla); step-great-grandchildren, Justine, Emily, Gavin, Breanna, Chaz, Sam, Alex, Jayden, Graeme, Myah, Adelyn, Emmett and Rowyn; by her siblings, Grace Appleyard, Ray Millar, Bob Millar and Bernice Johnson (Louis); also by her special friend Marcel Brisebois and many nieces, nephews, cousins and friends too numerous to mention.
She was predeceased by her parents, James and Agnes Millar; daughter Brenda Procter and son Donald Procter; her first husband and father of her children, Alvin Procter; her second husband, Allan Morrison; siblings, Olive Grandmont, Arla Campbell, Arnold and Angus Millar. Also by brother and sister-in-laws and two nephews.
She was born June 25, 1941 at St. Boniface Hospital. She was raised on the family farm at Harperville, MB and attended Bluff Island School.
She married Dad, Alvin Procter, October 4, 1958 and together they raised their three children on the family farm in Woodlands, MB. While still living on the farm, Dad started driving truck and she started working at Bristol Aerospace in the cafeteria. When Dad's work took him to Brandon, they moved there and it was there that Dad passed away in 1985.
She moved to Winnipeg and began working in the cafeteria at CKY. When they closed down, she went to work at Air Canada and worked there until she retired.
In 1989, she married Allan Morrison and resided in Stonewall, MB until 2005 when they bought a Condo in Lockport, MB where she was still residing at the time of her passing.
Mom was a hard worker. While living on the farm, she helped with the field work, farm chores and milking cows, gardening, canning, pickling, cooking and raising the children. When Dad got into trucking, she helped him packing and unpacking household things when he was moving people from place to place. She was known for her excellent packing. Whenever any of the family was moving, she showed them how it was to be done.
After she married Allan, she quit work in Winnipeg and became a full time homemaker. But she never quit working. She still cooked, baked, gardened, canned and pickled. It was then that she took up and enjoyed golfing with Allan. When they moved to Lockport, she developed the flower gardens and cared for them until just last year. She loved to travel and visit family and friends. They took many car trips to Alberta, BC and all over Manitoba. They also went on bus tours to the east coast and through the US.
She was always ready and willing to help others and enjoyed socializing while doing so. She was a member of the Woodlands and Stonewall Legions and received a Certificate of Merit for 46 years of service to the Woodlands Ladies Auxiliary. She was a Rebekah of the Stonewall Lodge. She also served on the Condo Board where she lived in Lockport.
She loved country music and going to the Old Time Country dances. She and Allan never missed a dance where the Country Pride Band were playing. Later on, after Allan passed away in 2012, she started going to the dances again and made many new friends who became very dear to her. She enjoyed going to lunch with or just visiting them. She was very close to her family and they could always rely on her phone calls regularly. They always knew when the next dance would be, because she kept a dance calendar and would phone to remind them. It was at one of these dances that she met Marcel and they soon became dance partners. As time went on they became a couple. At the time of her passing, she was selling her condo and would be moving to Marcels' and start a new phase of her life.
The family would like to thank the Selkirk Paramedics and hospital staff at Health Sciences Centre for the care given to her.
Cremation has taken place and due to Covid restrictions, there will be no Celebration of Life until a later date.
In lieu of flowers, donations can be made to Heart and Stroke Foundation, 6 Donald Street, Winnipeg, MB R3L 0K6 and to Canadian Diabetes Association, 200-310 Broadway Avenue, Winnipeg, MB R3C 0S6