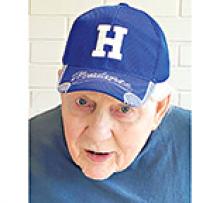 It is with deep sadness the Sabourin family announces the passing of their beloved Uncle Carl, on his 87th Birthday.
Uncle Carl was born on October 10, 1934, in Winnipeg, to Jim and Gertrude Porteous. Growing up Uncle Carl excelled in athletics, in particular hockey, where he was a naturally gifted player. He played in the MJHL for the Winnipeg Baron's and later professionally in the AHL, EHL and IHL with the Cleveland Barons, Clinton Comets, New Haven Blades, and the Toledo-Marion Mercury's Hockey Teams.
In September of 1957 Uncle Carl joined the St. James Police Department, where he received many accolades and had many stories in the few years he worked with them. He was a hard-working individual and held a variety of jobs within the Retail Industry, including car sales, furniture sales and interior design. He loved spending time at the family cabin at Bird Lake with Paul, Frances, and Uncle Maurice, and loved sharing stories of the many adventures he had out there. Uncle Carl had his demons with alcohol, but with strength and support he found his way to 35 years of sobriety.
In 2018 Uncle Carl was diagnosed with Stage VI Prostate Cancer and recently learned it had spread into his bones. He was a huge supporter of the Manitoba Motorcycle Ride for Dad, who advocate for the early detection and treatment of prostate cancer.
Uncle Carl was predeceased by his parents, Jim and Gertrude Porteous; sister Frances, and brother-in-law Paul, who were his greatest supporters; nephews, Roger and Paul Sabourin; and special niece Michelle Dumas.
Uncle Carl was a kind, loving and thoughtful man. He is survived by the Sabourin family, Marie and Lyn, Denis & Barb, Angie, Maurice and Krista (his "great shopper"); and great-nephews, Mason and Morgan; his daughter Cindy; estranged daughter Nancy; niece Cathy Matlock; four grandchildren; two great-grandchildren; nieces, Patricia and Lois, and their parents.
According to his wishes, cremation has taken place and a celebration of Uncle Carl's life will be held at a later date. In the meantime, Uncle Carl's family kindly requests that his friends and relatives take a few minutes to honour his memory by visiting his tribute page at EthicalDeathCare.com. A photo-biography, as well as memories and stories published by those who knew him, are available there.
The Sabourin family would like to thank Paramedic Crew 36, as well as doctors, nurses, and aides at both Grace Hospital Emergency Dept and Riverview Health Centre.
In lieu of flowers, donations may be made in Carl's name to a charity of one's choice.