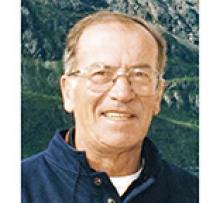 Ian Wesley Harland passed away peacefully, at 86, with family by his side, at his residence at Pinewood Court in Thunder Bay, Ontario, on October 1, 2021.
He was predeceased by his loving wife Donna Beverly Peck-Harland; his parents, Wesley and Agnes and sisters, Elaine and Lorna.
He is lovingly remembered by his two sons, Garry (Marilyn Romanetz) and Kevin (Margaret); by his sister Janet and brother Hartley (Grace); as well as his grandchildren, Madeline (Garrett Boe), Mikaela, Caley, Hugh and Emma, as well as numerous nieces and nephews.
Ian was born in Brandon, Manitoba on April 27, 1935 and resided in Rivers, MB. When he was very young, the family moved to Briercrest, SK, where he spent his formative years. In 1946, the family moved to Foxwarren, MB, where they remained until 1953. The next move took the family to Austin, MB and it was here that he met his future wife, Donna Peck of nearby Sidney, MB.
Ian followed his father's vocation and was a United Church Minister for a good part of his working life. He served in Vermillion Bay, ON as a student minister, Oxford House, MB, and Red Lake, ON. In 1977, Ian moved his family from Red Lake to Winnipeg. He worked at Rossbrook House for several years and spent the last 15 years, before retiring, as an Outreach Director with Federal Employment and Immigration.
As a young man, he excelled in baseball, hockey and track. Through his life, he was not afraid of a challenge and was comfortable on a farm - especially around a team of horses, operating heavy equipment, flying an airplane or behind an organ. He loved his gardening and took up wood working later in life.
Cremation has taken place. Ian will be interred in the Sidney, Manitoba Cemetery beside Donna on October 23, 2021.
If friends so desire, in lieu of flowers, donations to Rossbrook House or the Canadian Parkinson's Society would be appreciated by the family.

Condolences may be made through
www.nwfainc.com