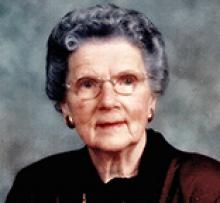 Passed away at the Tiger Hills Health Centre, Treherne, MB, on Saturday, October 9, 2021 at the age of 99 years, Reta Jean Ross (nee Christie), a 60 year resident on the Ross farm at Holland, MB.
Reta leaves to mourn her passing her two dearly loved sons, John W. Ross and daughter-in-law Carylann of Holland, MB, Gordon C. Ross and daughter-in-law Dianne of Calgary, AB and her only grandchild Dr. Nicole Christie Ross of Boston, MA.
Reta also leaves three nieces, Elaine Sanderson and JoAnne Murray, both of Calgary, AB, and Jeannie Christie of Cypress River, MB.
Reta was predeceased by her beloved husband Allan L. Ross (1995); her parents, William and Margaret Christie; her two brothers, W. Ledrew Christie and wife Louise, and Dalton E. Christie; and only sister Laura Murray and her husband James Murray.
A Celebration of Reta's life will be held in the Holland United Church at a later date in the summer of 2022. Her ashes will be interred beside her husband in the Ross family plot at Brookdale Cemetery at Holland, MB.
If it is your wish, donations in her memory and in lieu of flowers may be made to the Holland United Church Memorial Fund.

Online condolences may also be made
to the Ross family by visiting
www.willmorchapel.com

Jamieson's Funeral Services of Holland
in care of arrangements.