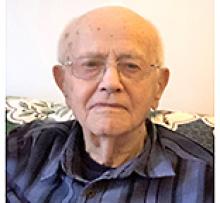 On October 10, 2021, after a brief stay in hospital, Dad passed away peacefully with family by his side.
Ben leaves to mourn his beloved wife Margaret of 70 years; his daughter Ruth (Ernie) Obirek; son Ron (Linda) Dyck; son Bob Dyck and daughter-in-law Gacheri Dyck. He also leaves ten grandchildren, as well as eight great-grandchildren. Ben is survived by his sister Ina and was predeceased by his son Roger in 2014.
Born in Lowe Farm in 1928, Ben was just two years old when the family moved to the Homewood area. After the death of his father in 1943, and with the guidance of their mother, Dad and his two brothers, Jim and Erven, took over the family farm.
In 1950, Dad married Margaret Warkentin from Glenlea and they started their own yard site a mile from the home farm. This was the farm where they raised their four busy children and built a life together.
Although he enjoyed grain farming, at the age of 28, Dad got his private pilot's licence. A couple years later, he purchased his own plane and later was able to take some aerobatic training. Now, any crop checking flight wasn't complete without at least a loop, a roll, a hammerhead stall or all three! Over the years, Dad took a couple long distance flights including a solo flight over the Rockies to Abbotsford, BC.
The plane gave Dad countless hours of enjoyment, but in 1983, when Mom and Dad moved to Carman, Dad turned his attention to other hobbies. At the tender age of 60, Dad took up his downhill skiing and quickly outgrew the ski runs at La Riviere. Dad and Bob decided to hit the mountains and the two of them enjoyed several ski trips to Whistler, Big White, Lake Louise and Sunshine.
Dad also had a lifelong fascination with electronics and computers. He was not afraid to tinker or make mistakes. Dad acquired his first computer when he was 60, and by the time his first great-grandchild was born, he had his own YouTube channel. He wasn't afraid to try anything with his computers. I'm certain Radio Shack knew him by name.
Even though Dad was semi-retired, he was only a phone call away. He was always happy to help with seeding, harvest or just running for parts.
It was only in the last couple years that failing eyesight and other health issues made Dad slow down and rely more on Mom. He had to hang the skis and put away the curling shoes. Dad was blessed with great health for the majority of his life and was able to live up to his adventurous spirit.
We are so grateful for the excellent care Dad received at both Boundary and Carman Hospital and especially from Dr. Kruk in these final days.
"Surely goodness and mercy shall follow me all the days of my life; And I will dwell in the house of the LORD Forever."
In lieu of flowers, donations may be made to Carman Palliative Care, Box 610, Carman, MB, R0G 0J0.